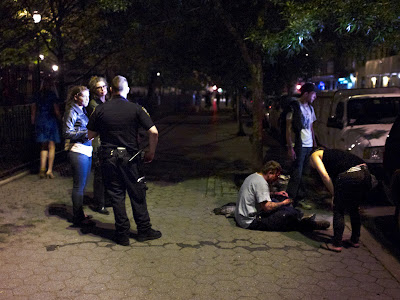 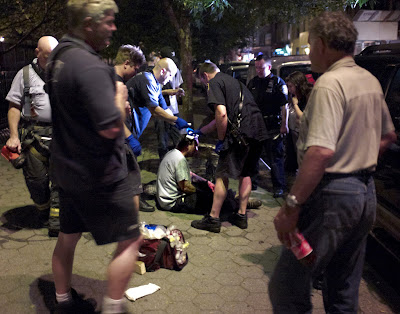 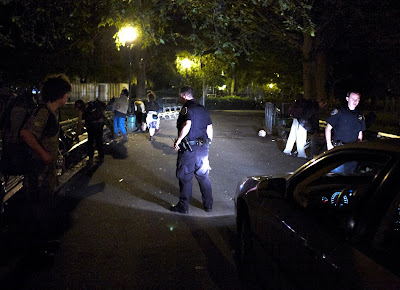 Jimmy Jones angered somebody on a crowded Crusty Row Saturday night , the first night in several without a uniformed NYPD presence in Tompkins Square Park , and in doing so earned himself some injuries including a very large and nasty bleeding gash in his scalp .
Certainly there was something of a violent scuffle in the midst of the mostly congenial partying crowd of Crustys and friends . Witnesses' accounts differ with some claiming that he was shoved and fell into a park bench and others claiming that he was kicked in the head . A drunken , stunned and confused Jimmy when we questioned him claimed that he had been kicked in the head .
Police , FDNY and an ambulance found him on 7th street in the middle of the block between avenues A and B around 9:30 PM . Somehow he had wandered with swollen , battered face and blood soaked hair draining blood into his his nearly swollen-closed eyes the 300 yards or so to the spot where some one found him and called 911 . Jimmy was treated at the mid block location and then taken to hospital .
We do not know much that is verifiable about what happened on Crusty row or why Jimmy Jones was hurt on Crusty Row tonight . We do know that there were different stories offered by different witnesses .Some of the folks involved tonight were probably also present on Crusty Row the night 4 weeks ago when Lesia Pupshaw and others were beaten . One thing is clear though and that is that the violence tonight was not done by a wilding gang of young Hispanic males from avenue C or D.
Later at 10 PM police cleared Crusty Row .
# posted by Bob Arihood @ 3:56 AM

Comments:
lesia was good friend of mine since 1994. i cant express right now how awful this is, i just found out about this- i am confused, what lesia attacked by a group a latino teens, or by a bunch of crusties?