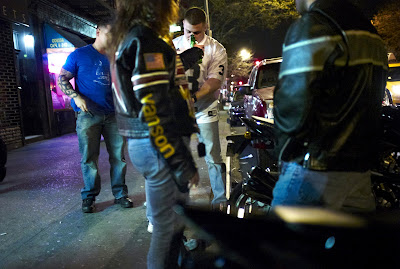 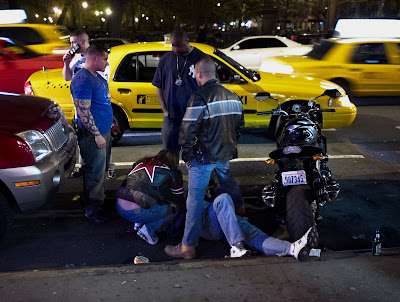 Three plainclothes police officers riding in a taxi cab saw a male drinking a beer on avenue A in front of Ray's Candy Store Saturday night . The police officers stopped the cab , exited the cab and approached the male drinking the beer . The male beer drinker , drinking a Heineken , was asked for his I.D. and was then for some reason also searched .
During this search the more or less sober male unexpectedly dropped to the ground apparently remaining at least for a short time unconscious .
An ambulance was called for and eventually and the male was taken to a local hospital .
# posted by Bob Arihood @ 2:00 AM

Comments:
Delete this one you should cover the undercover cops tattoo you are endangering his life having outed him so remove the tattoo with airbrushing asap.

two Jim is having more extreme mood swings and I heard he talked about getting a gun.

I will not have any contact with him because he made up lies in his brain because Jesse did not miss him and maybe because he isn't caring for her and being less than nice to her and also to get his pride and guilty off the hook because I spent a small fortune to get him off transferred from Wyckoff to VA -Jesse to East Village including a car to get to him and her in the first place.

he is literally breaking apart falling apart and it is very very sad but I can't do anymore and I would never ask anyone else to like I did because he turns around blames because he has too much self blame. It is clear he is mentally ill. The VA did not bother to x ray his hip and how about some counselling.


That being sad I don't want any contact with you because in some ways you are like him but not as extreme.

If you want to slam bloomberg photograph my poster one is hanging up in Whole EArth Bakery and kitchen. Billy the poser is a mike red square rosen developer puppet helping Bloomberg to get elected. This is art I hand painted despite having Jim harass and upset me as I attempted to finish painting this piece which is historical because it asks is democracy for sale. I am taking it up to to NY historical society this week and leaving with curator.

Thank goodness David McWater is chair of the community board and we have a lawyer for the DA heading sla3 clearly they help to make this community so much safer. Having people pass out from alcohol consumption is the way to go.

The mayor, Scott Stringer and even Rosie do not take this dangerous problem as a priority and until their are people that in leadership that do we can only thank G-d this person did not get in a vehicle and kill someone. It is a quality of life problem and stats will show I believe that alcohol abuse is related to crime so why a community board chair all these years that owns so many bars and no one including Alexandra Militano and the SLA had a problem with this...

I beleive that if one carefully reads the text that it is noted that the male that passed out was "more-or-less sober" .

His temporary loss of conciousness was likely not due to alcohol that he had consumed .

The police shouldn't be frisking and searching people for drinking a beer on the street. They should give the guy a summons and go on cruising around in their "undercover" cab wasting taxpayer money.

Why is There commenting about Jim? I just don't understand Bob? I don't see any pictures of him;or read any reports about him in this particular blog...will you please help me to understand? I feel so bad for you!

Anonymous poster #1 writes that they don't want any "contact" with you Bob, but in most circles writing long rambling posts on your blog all the time would be considered "contact." Yeesh-this person seems REALLY REALLY creepy!