Pissing Again on Avenue A ... 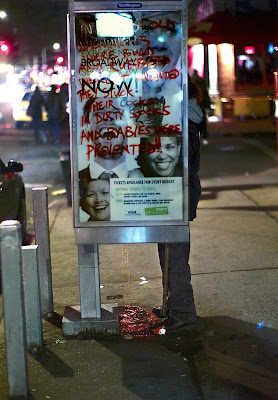 We return to this infamous phone booth of which we have posted several times in the past . This booth on avenue A at 7th street has been used regularly and variously as a pissoir , vomitorium , crapper , beer stash , message board , dressing room , place of numerous partly obscured sultry assignations and of course as a phone to place thousands of East Village heroin orders . More recently this booth has been known as on "Slumgoddess " as the "Pee Phone".

Tonight the booth was again in use . One of the usual suspects was availing himself of this booth , leaning on his cane using the booth as a pissoir . On the out side of the booth some local wag had scribbled in crimson a bit of old doggerel advising of ancient pregnancy prevention techniques . Earlier in the evening one of the angry and drunken locals had smashed the phone's hand set , spilling its electronic guts across the sidewalk . In the East village on avenue A some things just don't change .

Be warned , don't touch this phone ; do not use it . The vomitors and pissers , as can be seen from the nature of the dribbles above , almost always aim high .

P.S. 04:35 hrs Sunday morning : We have been told that the above pisser was arrested Saturday afternoon for pissing on a police vehicle in Tompkins Square Park . Several individuals took pictures of the event so take a look at Flickr and elsewhere , perhaps these pictures have been posted .

From your photo, it looks like that guy with the cane is pissing red....