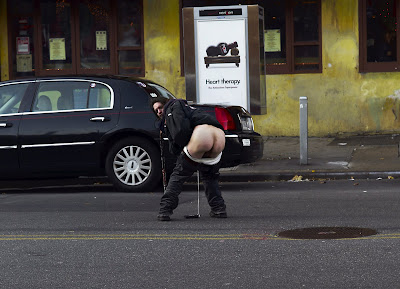 Saturday afternoon 2 Red Tailed Hawks , an adult and an immature , sat perched in trees high above Tompkins Square Park . The adult sat in the ancient , grand white sycamore at the St. Marks Place entrance and the immature sat in an elm tree near the 7th street entrance . A couple of dozen nervous pigeons were perched chortling endlessly on a long low limb of a lesser plane tree below the hawks . Some of these pigeons soon flew to a less risky roost high up on the parapet of a building across avenue A.
Below all of this on the park lawn , midway between the hawks , lay a headless freshly killed rat corpse . Red Tailed Hawks seem to like brains most . A couple of years ago headless pigeon corpses were found all over TSP : some successful winged hunter discovered that with all the prey available , an excess of pigeons , one could routinely dine on only the best parts , the brains that is .
Preparations for other feedings were also being made below our two hawks . Diane was readying her staff to preach to and to feed a couple of hundred hungry people . Folks , as on every Saturday and Wednesday , soon would gather , pray , sing and line-up for food provided by Diane's ministry .
Meanwhile in the middle of avenue A , L.E.S. Jewels set about furiously "mooning" and belligerently blocking traffic on avenue A. He spent a substantial portion of the afternoon with his pants about his ankles enduring among other things a physical attack and an encounter with NYPD .
Franky punched him around and put him on the ground for smart-mouthing him . A police RMP from the far side of the street nosed into the space between two parked cars next to Jewels , blocking traffic , with the driver telling Jewels--after having just taken a minor beating in front of Ray's-- to "pull your pants up or we'll have to take you in" . From the car window the officer at the wheel chastised him telling him that he should keep his pants on , "there are children out here " and then drove off . This was not the end of the exposing of Jewels' private parts .
Later in the evening Jewels' drawers dropped again as he flashed and mooned diners at Yuca Bar from the sidewalk in the midst of 4 drunken SantaCon Santas . Folks were only mildly amused , it is after all not the first time for this sort of thing on avenue A . Later , for a while , he again occupied himself with mooning and blocking traffic in avenue A .
Of course Amy was working next door at Ray's to help fill the family coffers as her Jewels exhibited himself on avenue A . After a long hard day of fun and drink Jewels finally passed out in the doorway next to Ray's . He did not go home with Amy when she finished work but slept somewhere on the street this night .
An aside here : we were told by some of the locals this evening that Jewels had followed them 4 blocks to Key Food grocery last night , Tuesday , with his private parts exposed . A significant feat indeed : that's a long way to walk with your pants around your knees .
We learned Saturday afternoon while walking in Tompkins Square Park that one of the park regulars , Black-Ops Bob (a.k.a. Robert Lee Griffin) , was locked -up in solitary at Bellevue Hospital in the psych ward for observation .
We were told that Bob had some problems with some social workers investigating why he had not paid the rent for his apartment at Baruch Houses . We were told that Bob became agitated , and angry with the social workers who were interfering with his life . At some point Bob threatened to sell his notebooks with all the nuclear weapon secrets to a foreign power if they didn't leave him alone . The message was received : the social workers did whatever was necessary and Bob is now at Bellevue 7W in solitary confinement in room 38 . We were told that Bob is asking for visitors .
We learned Saturday from Biker bill that Cowboy Stanley is still waiting for his friend Spike to return from Rikers Island. He was hoping that her recent court appearance would resolve her situation and that she would return to the East Village in time for Christmas . No such luck . Her court appearance was postponed to January 15 , 2009
Early Saturday evening at Ray's the Obama Fries signs outside on the front of his candy store created a problem .We were told by Ray that a normally dressed but quite drunken man stumbled in raging " you can't say Obama fries . You'll go to jail . My grandfather was fried , executed , in Germany in the death camps ...you can't say Obama fries " .In protest the man attacked Ray's customers , a man and two women . The male customer was grabbed , roughed-up a bit and one women was slapped and pushed around . Some how 75 year old Ray managed to calm him and push him out the front door .
Just another day in the neighborhood .
# posted by Bob Arihood @ 2:38 AM

Comments:
It is unfortunate that all the amusing crusties are gone. We are only left with this pathetic oxygen thief. Potters' is too exhaulted a plot of real estate for this loser.

Ah, there it is. Now my life is complete.

You can't really blame the coppers for declining to cart that cretin off in their car. They would NEVER get that stink out!

This shot, when not maximized, looks like Jewels is pissing out of his ass on the street.

He still uses the 7A phone booth as his private toilet, when he's not getting his ass kicked, er, I mean "adjusted" in the booth by someone he's pushed too far.

Did someone say "first in a series of East Vilage Holiday cards"?

It's enough to scare a yuppie back to Nebraska!!

Jeez, I miss all the good stuff.