The "Donut Social" is On for Friday Night , 5 September at 6pm to 8pm at the Corner of 1st Avenue and 5th Street... 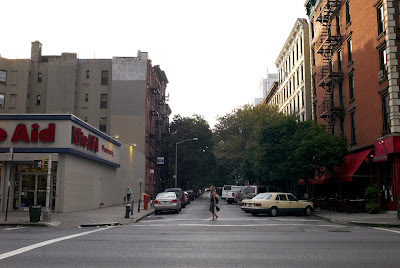 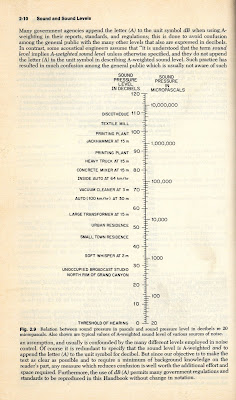 The above page is from the Handbook of Noise Control , edited by Cyril M. Harris ,Ph.D.
The unexceptional intersection of 1st Ave. and 5th St. pictured above , just half a block from the headquarters of NYPD's 9th precinct will be the site of a concert and protest this comming Friday night . There will be speakers and reportedly 2 bands , "The Crack Steady 7" and "DeathMold" .
There were some difficulties encountered in obtaining the sound permit for this event . Mr. Penley and Mr. Wade , the events organizers , had to threaten the City of New York and NYPD with intervention by a federal judge and a court order .
At this time there is one unresolved issue remaining , that being the maximum sound level . The NYPD is attempting to enforce a 70 decbel sound level at 100 feet with the permit .From the chart above it can seen that this is just about the same as the sound of a vacuum cleaner at 10 feet .According to Mr. Penley this level is routinely exceeded with out any action or comment by the NYPD at numerous Tompkins Square Park concerts promoted by others throughout the year . Mr. Penley and Mr. Wade feel that they are being unfairly restricted to an unreasonably low sound level by the current permit . We have included a chart from one of the noise control handbooks in our engineering library here at NMNL listing the sound levels of common devices , activities and situations .
For more extensive and continuously up-dated information concerning the "Donut Social"you can go to the Donut Social MySpace page :
http://www.myspace.com/thedonutsocial
# posted by Bob Arihood @ 7:55 PM

Comments:
hopefully all will go as planned--if not--will there still be donuts???

Oh my Donut Girl , you ask such difficult questions about the future which of course we just can't see that clearly . We certainly hope that no matter what happens with the evenings events that there will be a bounteous supply of donuts for all that want them.

you know dunkin donuts are controlled by Carlysle Group. so when you go to dunkind you are paying the Bush family.

It's ok for you guys to make noise, but complain when the the yunnies, frat boys, nyu students, make them.

Do Mr. Penley & Mr. Wade have real jobs, or are they just deadbeats living off my hard earned taxes? :-O

Actually Mr. Penley is a legal assistant and Mr. Wade has a small janitorial service in the East Village .

From the same 100 foot distance from the stage, the decibel meter that my buddy held indicated the sound level at 85db. From across the park, by the park keeper's office, the sound level was at 80db.

The volume, though not measured by my friend, of the Theater For The New City's performance in TSP a week after the riot anniversary shows was much much louder than the Christians.

Not that there's anything wrong with performances that rock so they can be clearly heard by attendees -- it's only fair that EVERYone be afforded the same ability to project their sound in order to be heard.

It's hard enough to spend the time, energy and money required to put on free shows. The last thing anyone needs, regardless of political viewpoint, is a sound gestapo that arbitrarily determines who will be heard, based on whether the NYPD likes or dislikes the theme or content of the shows.