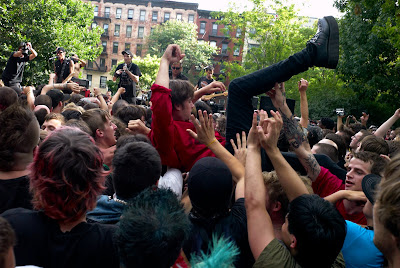 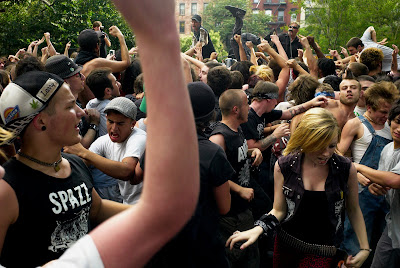 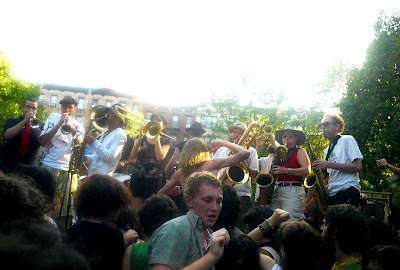 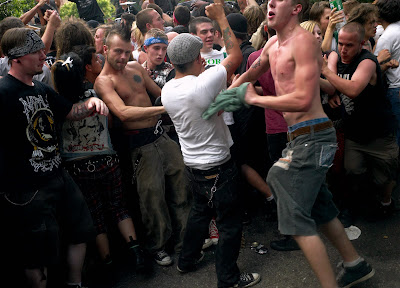 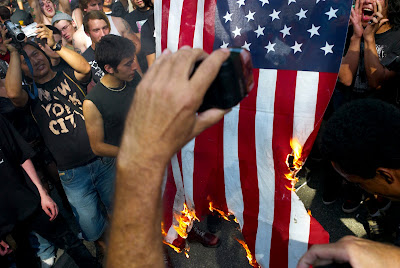 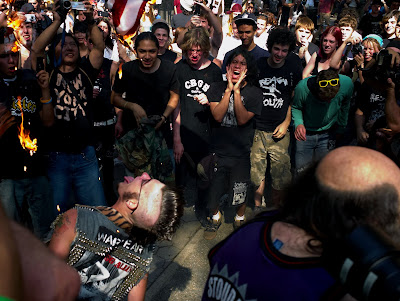 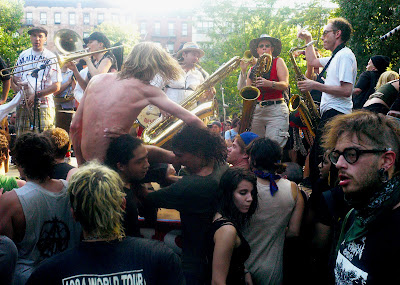 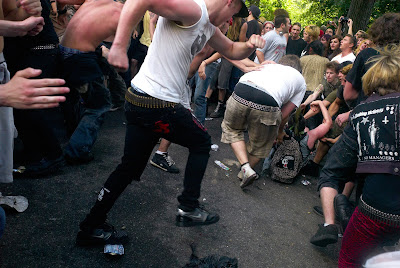 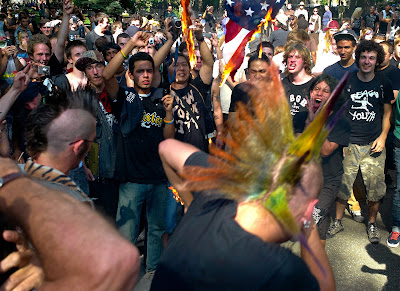 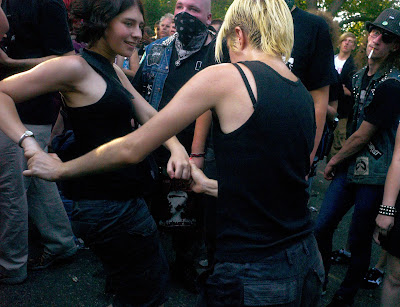 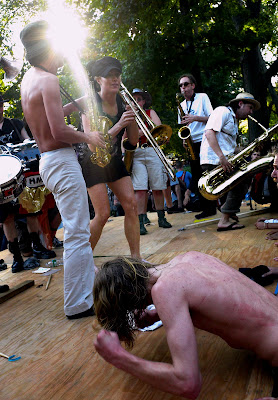 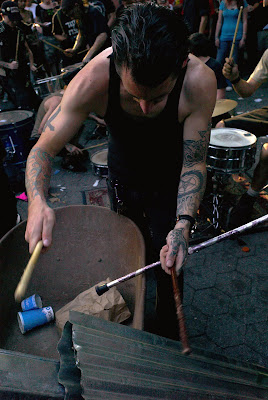 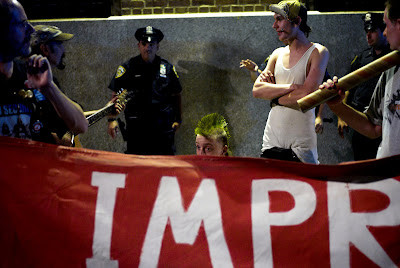 This Sunday afternoon anniversary concert was an impressive event . The anniversary celebrants drank a lot of beer and smoked some weed to a lot of loud music . They slammed with a physical intensity that TSP has not seen in many years .In the very densely packed pit up front by the bands where this supercharged slamming was happening our biggest problem was keeping sweat and body oils off the front of our lens so that we could get clear focused images .
The celebrants also burned a flag ; being polyester it mostly melted in flaming gobs .
Someone threw $1000 in dollar bills to the crowd and this crowd of celebrants burned the dollar bills .
We estimate the number of celebrants at 500 people but we were told late in the day that NYPD had estimated the crowd at 800 to 1000 people .
There was of course a traditional metal jam after the sound plug was pulled ; a number of folks drumming on metal items , drums and whatever had been dragged into the park .
The birthday party for David Peel went on but not just at the Christodora ; it came back to the heart of the park where there was still a large crowd that didn't thin-out until after 10 pm .Later some protestors went back to the Christodora where there were some minor confrontations ; one with an angry resident . The angry resident was almost arrested but the protestor involved did not press charges .
We were told that a $1500 summons was issued for some portion of the concert being too loud .
We have more stories and pictures but we have a choice : spend the rest of the night writing and loading pictures or have a few cocktails and give-up and watch a movie . We chose the drinks and the movie . Perhaps we will provide more details later .

Comments:
why are 21 year olds celebrating a 20 year anniversary?

Good question that perhaps should be asked by some of our elected representatives . Somethig is likely afoot out there .

I dunno, same reason we celebrate the 4th of July from 200+ years ago.

what losers. flag burning assholes. Too bad nobody burned these freaks.

can you send me the second picture
it wont let me click it to become bigger
thanks
toxicjkv@yahoo.com
myspace.com/kvizacrass

great pictures of the whole show

to the yuppie scum who wants to burn us because we burn flags -- how about we burn down your fucking yuppie luxury ghetto and get you out of our fucking neighborhood?

the fact that its "your" neighborhood is a joke

That shit was mad fun.

i was there, and im 18. we celebrate because its what we care about its our history. PUNK history. i live in the park and you wouldnt understand how the cops treat us daily unless you have been threw it. the government is against us. they call us parisites. so yea were guna burn the flag. i helped light it up. go to hell yuppie scum go back to wall street