Friday Night Next at the Bowery Wine company ... 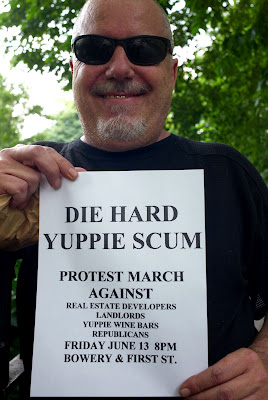 Mr. Penley and his handbill in Tompkins Square Park on Sunday afternoon . 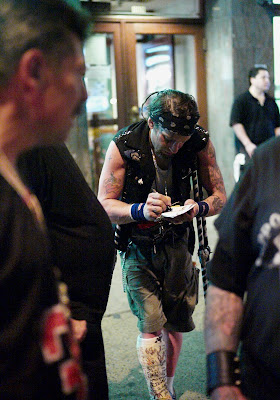 Above L.E.S Jewels is seen taking notes late Saturday night on avenue A as Mr. Penley speaks to some of the issues to be touched upon by the poem that he has commisioned Jewels to compose and recite on Friday night at the Bowery Wine Company protest on first street . 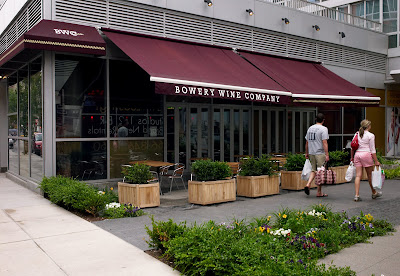 The Bowery Wine Company on east first street between 2nd avenue and the Bowery . 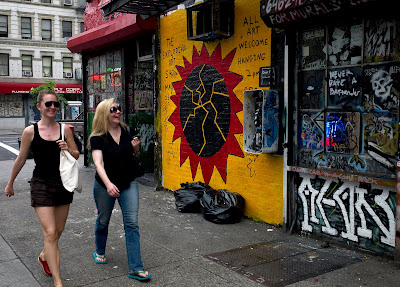 The venerable drinking establishment , the Mars Bar , just to the east of the Bowery Wine Company at the corner of 2nd avenue and 1st street .
http://www.villagevoice.com/music/0816,the-east-village-goes-south,411840,22.html
http://www.nypost.com/seven/06052008/gossip/pagesix/gop_takeover_113989.htm
http://www.nypost.com/seven/06062008/gossip/pagesix/willis_winery_irks_bowery_activists_114266.htm
If you have been looking at "Page 6"in the NY Post the last few days then you already know of what we write here : John Penley and friends versus the Young Republicans Club . If you haven't been reading "Page 6" then check the links above .
Mr. Penley has for some time now been planning a protest and feast of roast pig , Cuban style , this August . The pig's name is Bruce after reported part owner of the Bowery Wine Company Bruce Willis . As Mr. Penley puts it , it is a protest against yuppie scum : real estate developers , landlords , wine bars and Republicans .
Recently the Young Republicans Club in defiance of Mr. Penley's announced August protest has decided to take on Mr. Penley and his team of protestors as well as in time take over the whole East Village with briefcases and Blackberries in hand . The group has chosen the Bowery Wine Company as their meeting place .
This Friday , June 13 ,2008 at 8 PM Mr. Penley and his team will protest real estate developers , landlords , wine bars as well as confront the Young Republicans in the street out front of the Bowery Wine Company .
This sunday afternoon we interviewed Mr. Penley in Tompkins Square Park . We learned that among the several members of the protest team are Penny Arcade , who will perform .Rev. Frank Morales will attend and speak . The Rev. Billy has been invited . Aaron "the pieman" Kay with pies will be there along with Green party candidate Cynthia Mckinney . L.E.S Jewels will recite a poem composed for the event . Who and how many more will be there we do not know but Mr. Penley has asked the 9th precinct for plenty of barricades to separate the contesting parties . Mr. Penley sees the event as not just a protest but as much more , a Friday night Block Party on 1st srteet between 2nd avenue and the Bowery .
So show-up ... and when you have had enough and can't afford $20 for a glass of wine and a panini at the BWC , head down the street to the east for some cheap drinks and real EV atmosphere at the venerable Mars Bar .

show up to mars bar - i'm working. it has been deathly slow and boring - would be great to get a fun group in, haven't seen that happen since cbs closed.