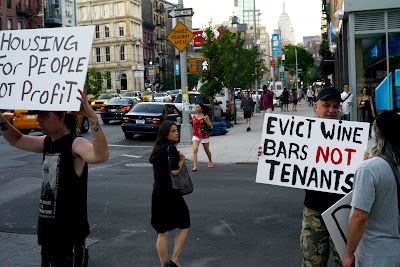 No one expected that the protest would get the attention that it did . Most thought , well , its just a little fun for some old Yippies ; a chance for some crustys and punks to run wild . Quite to the contrary , though admittedly silly and pointless at times , the event from the beginning , right through the march through the streets to the end at the Christodora , got noticeed by the public ; the event got some real traction in the street .... and all the city papers had people there to cover the story .

There were confrontations all evening begining with the one declared not-so-young Republican standing-up to the protestors at the Bowery Wine Co. right to the end with a good bit of stupid ugliness at the Christodora .

From our conversations with by-standers along the protest route , the protest seemed to have struck a sympathetic chord with many of the less well-to-do , fearful and frustrated New Yorkers facing bigger rents , higher prices , an indifferent Bloomberg administration and an NYU that is ready to gobble their whole neighborhood . It seemed from conversations and observation that for many of those who appeared to have sufficient wealth to live easily carefree in this city the affair was perceived as most often befuddling or pathetic and perhaps at times quaintly entertaining .

The protest began at the Bowery Wine Co. on 1st street . After a short demostration there the protestors moved down to the Bowery , turned north and marched past the John Varvatos store and the Bowery Hotel to 3rd street and then east to the Ekonomakis residence . After a brief pause at this location the group moved on to Tompkins Square Park and then to the building that traditionally is considered to have started it all , the centerpiece of the 1988 TSP riot , the Christodora .

The 9th precinct did a good job of maintaining reasonable order while allowing a protest without official sanction to run through the streets . ...with out arrests .

This was not a major event ; just a couple of sparks with no flame . But it was a lot more than anyone expected and it bared the fact briefly that there was an only-slightly-submerged sympathy among the less well-to-do working people with the protest organizer's desire to prevent those with wealth from taking over their neighborhoods . 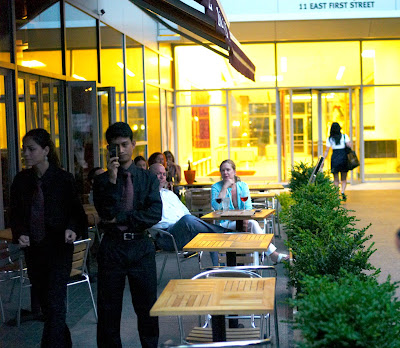 The motley group of protestors was for many a curiosity and they photographed . 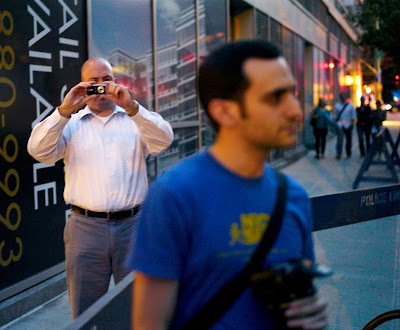 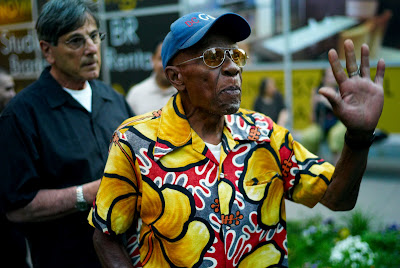 This one Republican , refering to the protestors as liberals , stood alone against an overwhelming 100 or so agitated protestor opposition . At times later in the evening there were perhaps as many as 200 involved in the protest . 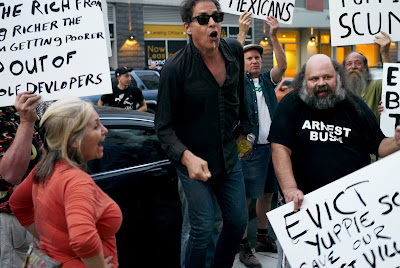 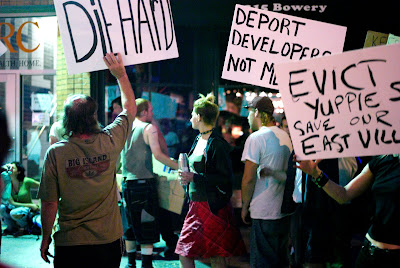 At the Varvatos store tempers were hot and the firm but low key response of the police probably saved the day . Some if pushed here , with an arrest for rowdy behavior for instance , would possibly have broken some windows and more . 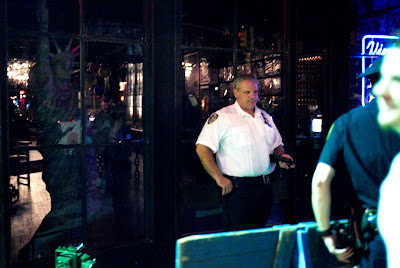 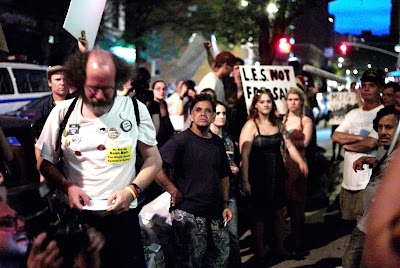 The protestors at the steps of the Ekonomakis residence on 3rd street make their presence known . Many among the group promised to return to support the tennants of this building when their eviction day comes . 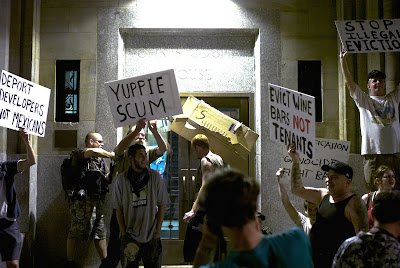 On the steps of the Christodora protestors gather for the end of the protest . The Christodora , a former community center built by a philanthropist to serve the community , is now an up-scale gentrified residence for the relatively well-to-do .For the protestors it is an enduring physical example of what has gone wrong with the city recently as more and more , those from all over the world with wealth seize every last bit of neighborhood property .
This building , its conversion and gentrification made it the ultimate target by rioters during the 1988 Tompkins Square Riot . Late in the riot the building was entered by rioters , lobby plants were liberated and planted across the street in TSP .
The original organizers had not intended to end their protest at the Christadora ; indeed they had not even intended to bring the protest to the Christodora but sympathies and undercurrents established somewhere in tradition selected this traditional symbol of gentrification as the end to the protest . A surprise to some we are sure--and inconveniently problematic for several reasons for a few --but an understandable place to end the evenings protest activities . All these complications another story for another time 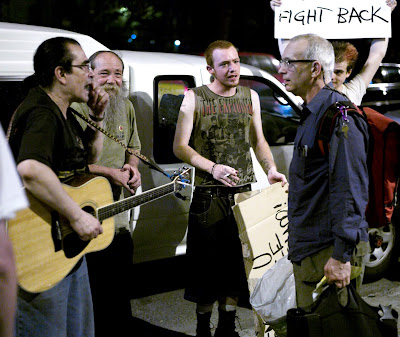 On returning home the owner and resident of the top floor penthouse of the Christodora , Michael Rosen , found the group protesting his building and was clearly angered by what he found on his door-step .
For Mr. Rosen , who was one of the developers of the big red box on Houston st. with Vlad Lenon standing on the roof , Red Square , there was some heated conversation with protestors including notably David Peel above and below . 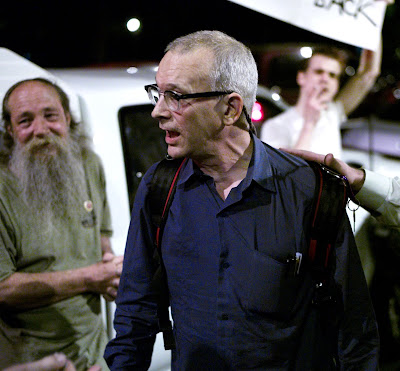 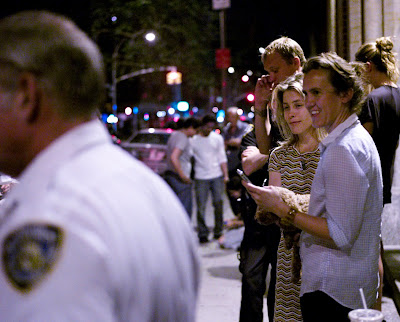 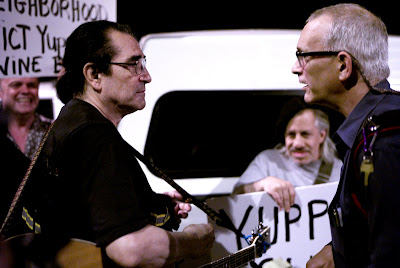 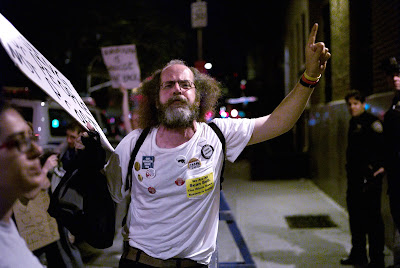 At the end of the evening with many of the original group departed , a hard-core of oldtime "professional"protestors --individuals who protest everywhere persistantly as a way of life-- took charge , and with considerable venom , vented their frustrations and miseries haranguing a few members of NYPD calling them perverts and child molestors . There were also some stupid comments concerning religion . With this nonsense the evening ended . There were no arrests . 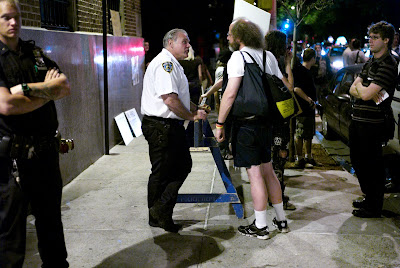 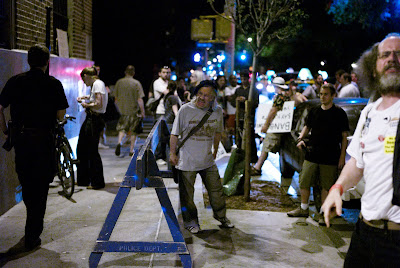 Comments:
Bravo for the 9th Precinct.

Now can you go arrest the community crushing developers? What they are doing feels criminal!

Lenin is waving at Mike Rosen saying hey Mike you are so full of shit!

But the dude has a lot of money and owns a lot of roof top property and can put his rich man toys on them all if he wants and people need his big bucks...

I get it. Shove Lenin down the neighborhood's throat but shower the people in need with money from your penthouse and you can pretty much get away with what ever you want?

How funny, a developer that names a building "Red Square" and forces Lenin on a neighborhood that doesn't want Lenin waving from any roof top and Rosen lives in a penthouse of a building that was once a welfare building.

True communist ideals and than Rosen enjoys thwarting other developers.

He wants to rule this neighborhood as if it is his fiefdom from his penthouse. Take your Lenin statue and put it on the top of your luxury penthouse high above the entire East Village.

Hey Mike run for community board chair that is if John Sexton doesn't want the job!

There is no doubt the Crista Dora owes the community a community facility and Mike Rosen has not lobbied for the community on this issue because it does not serve his ego trip and would be down right inconvenient.

Even that pathetic excuse for a newspaper, The Villager, before it sold out to NYU and other developers had a piece on the fact the Crista Dora just might owe the community a facility.