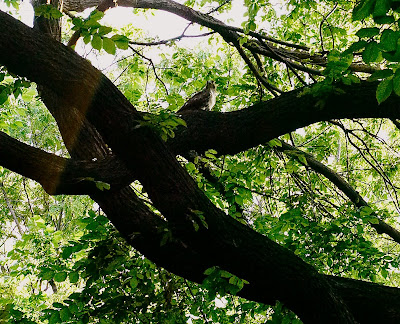 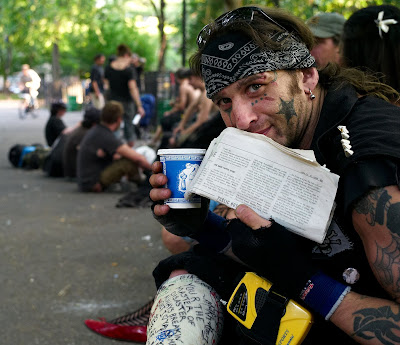 With a Red Tailed Hawk in the tree above gutting and plucking a pigeon with the feathers floating down like fluffy grey snow flakes on them , the Crustys with L.E.S. Jewels among them , went about their business on the very recently reborn Crusty Row Thursday evening . We observed that all things seemed in place and right with the world this evening in Tompkins Square Park with this recent renaissance of the venerable Crusty seating arangement and social institution right next to the other major TSP social institution : the dog run with ass-sniffing pooches and those who gather to watch them . What could be more Tompkins Square Park than this ?

A year or so ago the Crustys were driven from and denied access to this row of seats that had been named for them . Until recently NYPD and the Parks Dept. allowed the Crusty community to gather in a small out-of-the-way shrub enclosed enclave near the basketball courts . A couple of weeks ago this area was also denied them . They were for a while a diaspora scattered in small groups on the benches , grass and asphalt of TSP . Two days ago they returned to their namesake seating in the central part of TSP near the current dog run .

Above L.E.S. Jewels on Crusty Row is displaying an announcement listed in the Villager of the protest in front of the Bowery Wine Co. tomorrow night where he will read a poem that he has written just for this event .

Erm, if you look at the second picture, it's pretty self explanatory.

This wasn't too hard either

Thank God for Wikipedia ,answers everything

I wonder..... is Bob A. in love with this jewels guy or what! so much "homo-erotic" vibes in the eyes of his camera lens.

yep theres a hot&crusty on 14th street and 1st ave. i didn't know they were called "crustys" but i don't know if it offens them so, im going to keep my mouth shut.

It would be PRETTY HARD to offend a crusty. They're not exactly hostile people. Probably more friendly than the majority of people in the LES. People just decide to fear them due to their appearance and automatically assume there's some reason to fear them. Although there isn't one.