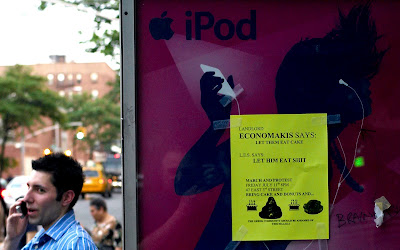 We have been told that all contributed donuts will be reserved for the members of NYPD that show-up for the Friday night protest at 47 E 3rd Street .
We have also been informed that there will be a very large cake of the shape of a fresh dung heap , baked and delivered to the protest site for this event . The cake will of course have a dark brown frosting with appropriate commentary scribbled across it directed to the attention of the Ekonomakis family.
For some relevant history :
http://www.nytimes.com/2008/06/15/nyregion/15evict.html?ref=nyregion
Finally the organizers of this Ekonomakis protest also claim that a march to Red Square at 250 East Houston will follow the protest event at 47 East 3rd Street .

Comments:
Dear Bob,
I'm interested in getting in touch with you regarding John Ranard's life. I'm a photo editor in a newspaper in Spain and we are going to write an obituary about him so I'd like to ask you something, if you please could send me an e-mail to: cgallego@lavanguardia.es

Best regards and thanks in advance!
Cristina

New York landlord Alistair Economakis's fight to rid the five-story tenement on 47 East Third Street of its tenants has disturbed me, but it hasn't surprised me. That's because I have known Alistair's family for many years now. You see, I have the misfortune of being his first—and eldest—cousin.
Alistair was always a rich brat. I remember once, in some village in southern Greece, he stuck his five-year-old head out of his father's—my uncle's—car, and, encouraged by his guffawing dad, shouted insults at elderly women, calling them "hags". I nearly slapped my little cousin's face for that. I regret now I didn't.
The apple doesn't usually fall far from the tree. My uncle Alexander (Alistair's father) is a philandering old playboy who idolizes the worst in America—including the robber barons of the 19th century. Back in 2005, when I first learned of the scandal brewing in New York around the Economakis name, I asked my uncle if it was true Alistair was trying to evict people from the building in the East Village. His answer, word-for-word, was: "Yes, and good for him—most of the tenants are Jews anyway. He'll make a killing when he sells the building."
Shocked? You shouldn't be. It's almost impossible to be filthy rich and not be a rotten scoundrel inside. After all, behind most great fortunes lies a crime. But Alistair and his wife Catherine Economakis (who is much wealthier than my cousin, and is the real force behind the scenes) will reap what they've sown. Their crime will come back—again and again, for as long as they live—to haunt them. Of this I haven't the slightest doubt.
My cousin, who grew up in Greece and England, wraps himself in the American flag and evokes the U.S. Constitution to "justify" his family's need to live in 60 rooms, in a 11,000-square-foot home. I've read the popular outcry, the indignant outrage. Yet what do people expect from the likes of my cousin and his wife? Crying "shame!" or noting the irony in the fact that Alistair's mother-in-law is a Columbia University dean who teaches urban studies, of all things, is an exercise in futility. I can assure you they aren't at all fazed by such criticism.
So many good people bemoan the legal ruling allowing the eviction to take place. This is naïve. Who makes the laws, after all? The government does. And what is the government but the representative of a country's ruling class? What do low-income tenants expect from the enemy, after all?
Yet what goes around tends to come around. You can spit on the collective—as Alistair and Cathy Economakis have done, but it's quite another thing when the collective turns around and spits on you!
Low income tenants of New York! Run the Economakises—and all human lice like them—out of town! Turn their "American dream"—a dream at your expense—into a real nightmare! Give them no quarter! Make it physically and psychologically impossible for them to evict you! Send THEM packing!
Evel G. Economakis,

Mr. Economakis ,is there some way that we can confirm your identity and relationship to the Economakis family living at 47 e 3rd street .

Your statement is strong and very damning .If genuine we much appreciate your placing it at NMNL .But to treat the statement seriously we need to verify its truth and provenance .

We are aware that there is an author ,Evel G. Economakis , who has written a book , a very expensive one , that treats in detail of the the early years of the 20th century in Russia .Perhaps you can tell us something more on this .

We apologize for not being more trusting but your comment here is if genuine , a statement of some considerable moment . Now that your comment is on NMNL it will be looked at by a great many people at other sites that link to this one .It will certainly be used as damning rhetoric by those mounting protests against the Economakis family .your proven identity is necessary for us to continue to post this statement and confirm it as genuine . This is after all the internet,i.e.,a place that to a large extent is a fantasy land .

This is a hot summer in NYC and though we are sympathetic in spirit with your comment we do not wish to further empower people to be unecessarily inflamatory by supplying them with a false statement to brandish in the support or their ends .

Tempers are flairing and the possibility of some violence generated because of this issue of ownership at 47 e. 3rd street is real.We must be responsible here : we need documented fact to place all including your comment in its proper context.

David Pultz told me to send you a note verifying who I am, Evel G. Economakis, Alistair's first cousin, and yes, I do stand by the note you've posted here.

economakis landlords are soul-less maybe their children will rebel by being human having hearts and empathy.

We have just this evening spoken with David Pultz who is a tennant in the Economakis building at 47 e 3rd street and he has confirmed that he did communicate with Evel G. Economakis in Athens Greece . Mr. Economakis' original comment here has been verified as genuine by both Mr. Economakis and Mr. Pultz .

Please take a look at the 47 E 3d website. I am a community activist very much involved with the issue at hand, however I was not aware of the other 50 buildings that people are being evicted from. Take a look at all the building addreses in the East Village, and Lower East Side.

This is somehting that affects all of us indirectly. If you are not currently being evicted take a look at the list- your neighbors may be in jeopardy.

Please make a contribution to 4t E 3 - they are fighting the battle for all of us.

Evel,
Since you spoke so passionately maybe you can implore your "rich" family to contribute to the 47 E 3rd legal fund.

Hi, this is Evel Economakis, and, yes, I do exist.