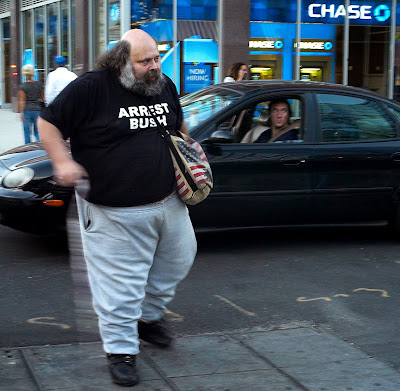 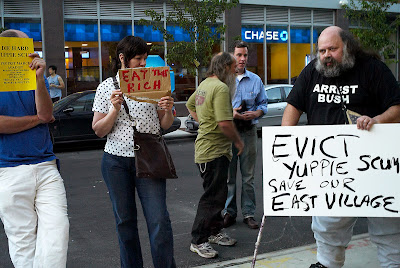 Late Friday night we received a phone call from Yippie elder statesman Aaron "the pie man" Kay informing us that members of the Avalon Bowery security staff had accosted and harrassed him while sitting incapacitated by heat and humidity on one of the benches in front of Avalon Bowery Place on 1st street .
Aaron recounted that he was on his way to his current residence at the Yippie Building at 9 Bleecker street . Aaron ,who is overweight , diabetic and has considerable difficulty walking using a cane , was walking from the subway at 2nd avenue down 1st street when he was overcome by the New York summer heat and humidity . His nearest haven of rest was a bench in front of the Avalon Bowery building . Weak and desperate for a place to collapse ,rest and regain the strength to continue to his home , he sat down on the bench .
According to Aaron , shortly Avalon Bowery security personnel accosted him demanding that he leave the property of Avalon Bowery immediately . Aaron claims that they informed him that they knew who he was and that he had just 2 weeks before protested against Avalon Bowery and the Bowery Wine co . and thus he was not welcome on what was their private property . He claims that he was told that he was trespasing and that they would call the police to remove him .
Being incapacitated by the heat and unable to move Aaron remained seated on the bench resting . According to Aaron , two female police officers arrived at the scene and though polite and proper informed him that indeed he was on private property and that he would have to leave . Aaron claims that he did comply with police and with considerable difficulty did leave the Avalon Bowery property . He did eventually did make it home to 9 Bleecker street , just a bit more than 2 blocks away .
It seems that with this event and others , including all the recent shootings in the neighborhood , that the that the summer is heating-up in more ways than just thermally . There is evident sentiment in support of protest and confrontation in this polarized society divided mostly by wealth ; between those that have and will only take more and those who have just enough to survive in this city .
Support for the July 11 protest against the Economakis family for instance is growing . Now the organizers of that protest intend to protest not just at 47 e 3rd street but will take to the streets and march to the NYU dorm on 3rd and Bowery then to the John Varvatos store , then to the Bowery Wine Co. to claim some of the free pizza promised in the "Observer "story by the BWC owner ,then to the Ludlow , then to Red Square on east Houston , then to Tompkins Square Park for a speak-out , then to the Christodora to demand that the swimming pool be opened to neighborhood children and then finally to Union Square Park .
If a recent comment here on NMNL is genuine , notice of the intolerably expensive real estate situation in our city is noticed in other parts of the world with sympathy .
See here ,we have now verified this comment :
https://www.blogger.com/comment.g?blogID=30373593&postID=731824557273765625

Comments:
i am not done with those yuppie assholes!!!!