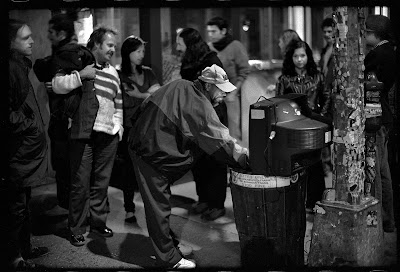 Yes , what is pictured above was common in the East Village of yore . Folks , especially on hot summer nights watched TV by street light . Often they had a beer or two with their tube-time . They even gathered on the sidewalk in front of the tube while casually playing cards or dominoes . ... of course also with some beer or a shot or two of rum , vodka or tequila . This was when we still had a neighborhood and a sense of community .....and since the TV was plugged into an outlet that can be found inside the base of most street lights , ultimately the City of New York paid for it all .