Star-burst Over Prince Street : The 4th of July Before Giuliani and Gentrification in "Little Italy"... 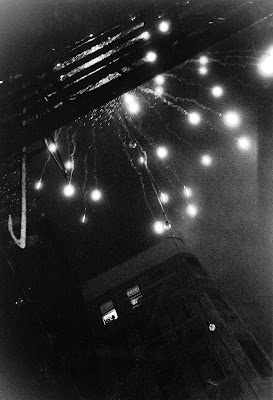 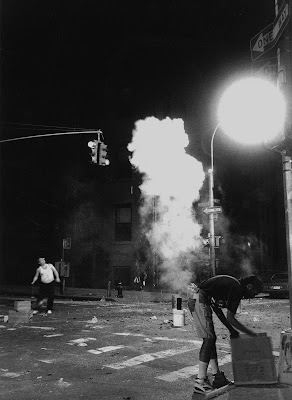 No ... on the next 4th of July DO NOT try this at home but ....
Before the Giuliani administation took charge allowing the developers to take over the neighborhoods , the people still ruled in this city and every 4th of July some of them provided the best pyro-technics display in the city ... or in any other city for that matter .
Every year in "Little Italy" right after the big Macy's show over the river a pyro-technic extravaganza took over the streets and sky of downtown NYC . You saw the same fire-works as in the Macy's show but downtown you were 25 ft. or less from them when they were launched or exploded....not across a damned river surrounded by cops .
The display downtown was perhaps not the safest of public events . Sometimes , for example , the aerial bombs didn't make it out of the mortar tube before they exploded . When this happened the immediate area was showered with hot sparks ... falling on the by-standers as well as on the near-by large mound of yet-to-be-launched bombs . There were surprisingly few injuries .
The event was entirely a neighborhood administered affair with many visitors present and consistant with a desire for a safe neighborhood display only certain experienced individuals were allowed to launch the bombs . Traditional custom and sensibility as well as the summer heat demanded wearing sensible traditional fashion such as here a "wife-beater" for instance . We recollect that tradition also dictated that the bombs be lit by cigar as often as possible .
We would show you more of this traditional event but for the problem that the images are lost somewhere in our enormous file-room here at NMNL world headquarters .
# posted by Bob Arihood @ 2:20 AM 1 Comments

Last Week on Avenue A 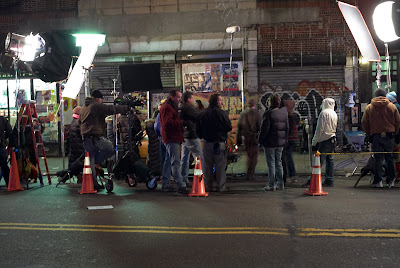 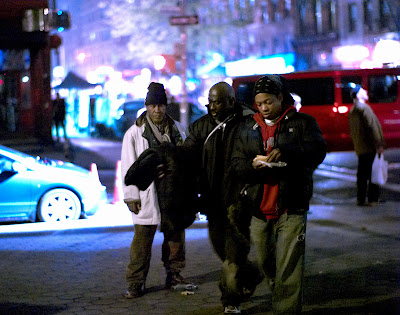 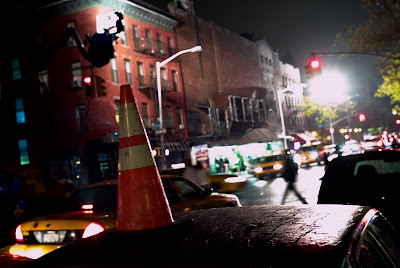 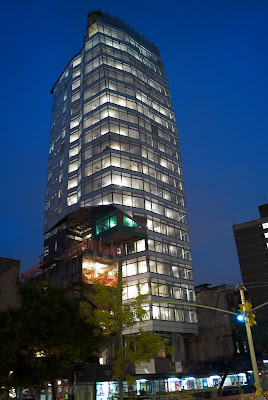 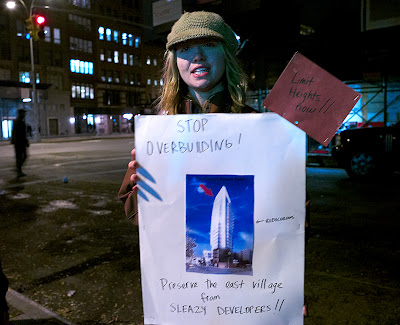 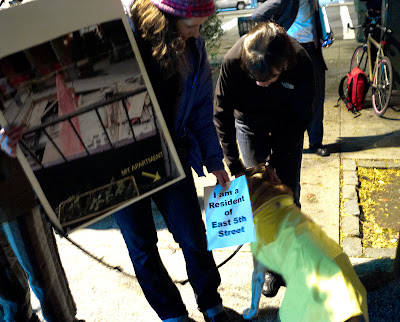 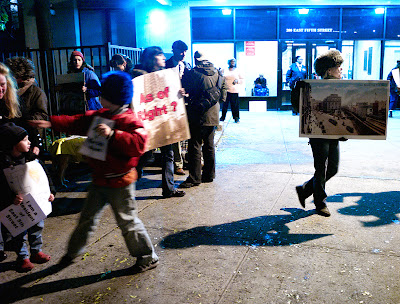 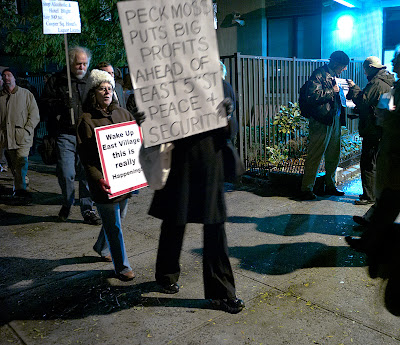 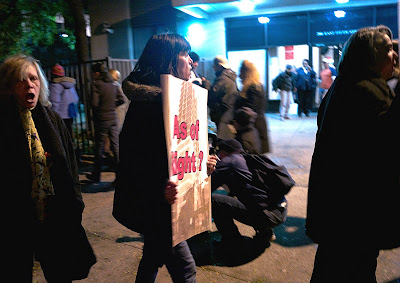 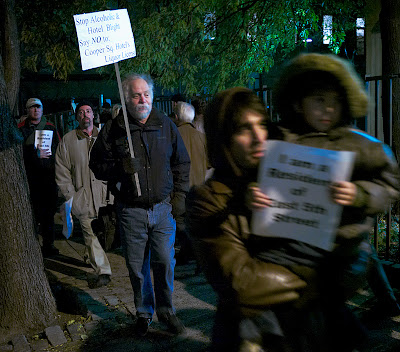 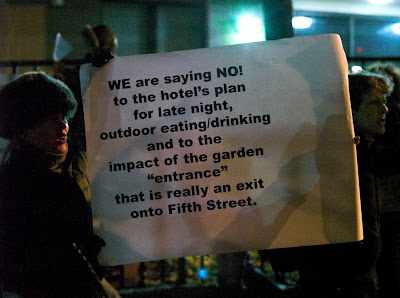 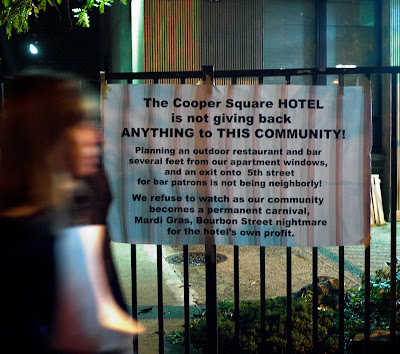 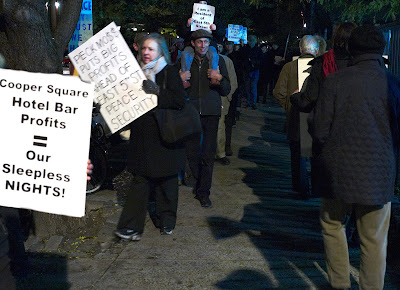 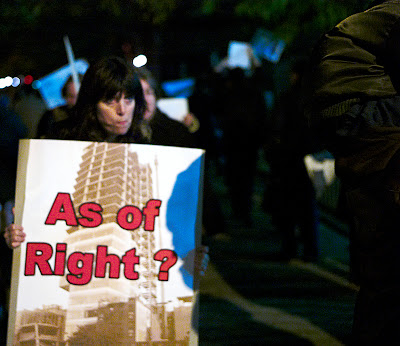 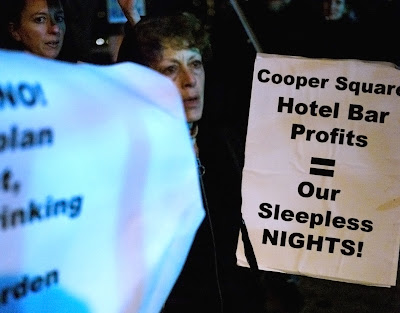 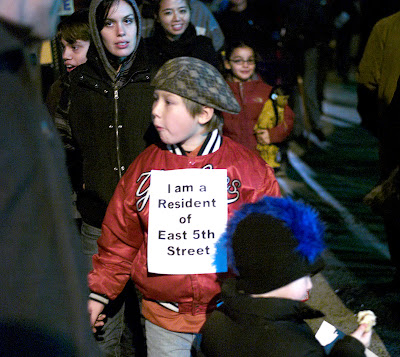 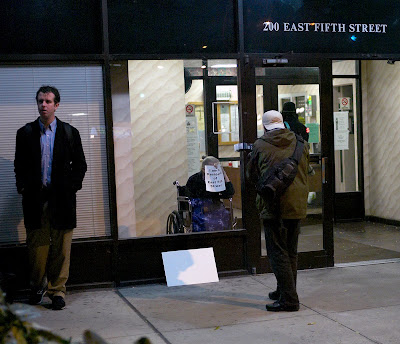 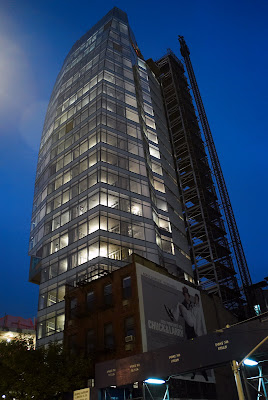 This monster of an edifice at the corner of 5th street and Bowery , completely out of place and scale in the urban context of the neighborhood that surrounds it , was the object of a robust protest Monday night . A group of local residents , 50 t0 75 in number including some of the senior citizens living at the senior citizens home at 200 East 5th street , gathered across 5th street from the Cooper Square Hotel to protest the hotel's arrogant presence and to protest what appear as troubling plans to operate a large outdoor restaurant and bar .
This Cooper Square Hotel , and most of the other monster buildings intruding everywhere downtown for that matter , are often refered to as phallic by their critics for all the obvious reasons . In the case of this Cooper Square Hotel though ; as well as with some of the other out-of-scale buildings , to us here at NMNL at least , being that this structure is long , has a sensuosly curving taper , is so very mechanical looking and is always popping up there ... always errect ; we suggest that it is rather more dildo than phallus . Of course this is all a matter of opinion ,we know , but we suspect that at least some of those protesting on the street Monday night could on considering the matter perhaps find that they could agree with us .
With the presence of this new hotel , the several others that already exist and the several new hotels to come in the near future in downtown NYC can it be long before we will see a NYC version of Las Vegas , a sort of " Las Vegas , Las Vegas " , grow under our feet displacing the East Village , at least as we know it , of necessity to fill these hotels with tourists , corporate traveler-partiers and week-end revelers ... so-called "market forces" ( greed abetted by indfferent and/ or corrupt city and state agencies ) at work have already changed our community radically...there should be no surprise here . We already have the original "Coyote Ugly " and "Rays Candy Store " too ; we just need an Eiffel Tower , a giant pyramid and a few other sundry mega-fantasies to reify this bastard of a night-mare .
Finally we allow that the faces and words of the protestors tell the evening's story very well ... so no more rants from us . 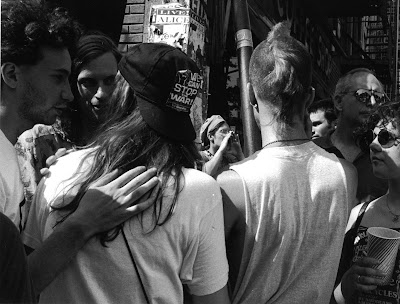 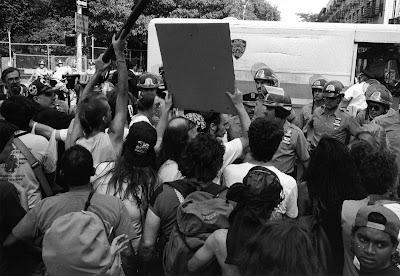 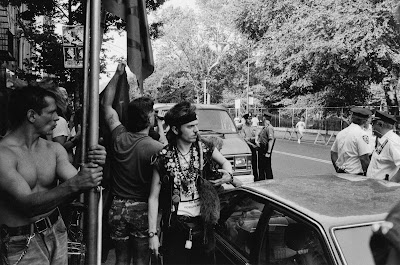 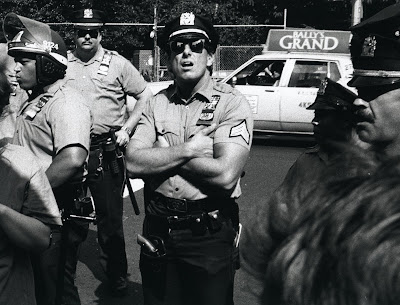 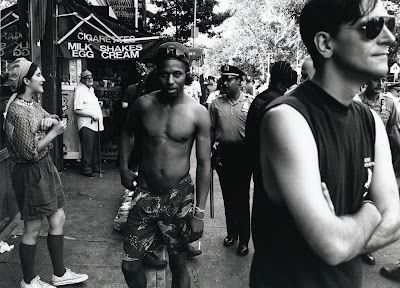 This was just one of a series of many , many weekly protests that occurred for several months ...until it turned cold ... protesting the closing of Tomkins Square Park . TSP had just been closed and fenced in because of 3 years worth of riots in and around the park , the last one being the Memorial Day Riot which can be seen here at NMNL using the "Blogger" search window above .
# posted by Bob Arihood @ 8:12 PM 0 Comments

Once Upon a Time at 6th Street and Avenue A ... 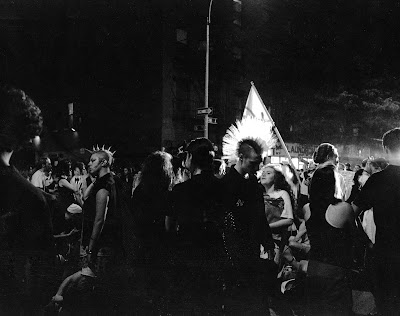 Such scenes of protest were common on warm nights in the late 80 s and early 90 s around Tompkins Square Park , especially on avenue A .
# posted by Bob Arihood @ 3:34 AM 0 Comments