The Arrest of Drac... 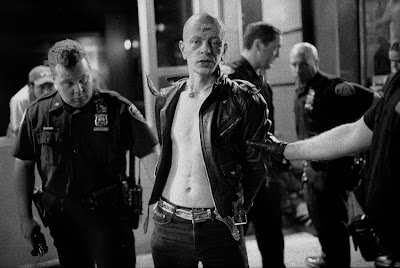 One night several years ago a skin-head by the name of Drac was arrested on Avenue A at Ray's Candystore ; an arrest in which we were ultimately forced to participate .
Earlier in the evening , before his arrest pictured above , Drac edured several beatings in Tompkins Square Park . We saw Drac several times this evening enter TSP and then after a very short period of time to the sound of yelps , howls , moans and much shouting of profanities we could see Drac , while being beat upon by a small band of very agitated TSP regulars , running down avenue A . Drac was certainly taking punishment as can be seen from the gash on his forhead in the picture above ... and repeatedly so , but why?
Having dined at Odessa restaurant earlier "Loan Shark" Bob was now out on the street this evening going about his shylocking and fenceing bussiness . After several what must have been painful forays into TSP , Drac decided to turn to the west side of avenue A for adventure ; the side of avenue A where Bob was operating wrapped in his signature up-side-down American flag this evening .
Drac noticed Bob and began to slowly approach him . When at close range with Bob Drac began howling and then lunged at Bob just missing getting a hand on him . Bob , of course being no man of great courage or ability to fight , let out a loud squeal and ran with sandals flopping , squealing and whining loudly to the other side of avenue A . Drac followed Bob a short distance across the street but lost interest and ended his pusuit of our local flag wrapped shylock and fence .
Drac then wandered up and down avenue A aimlessly for a while until he spied an individual exiting Ray's Candystore , a very drunken individual , with two hot dogs with everything and an egg cream precariously balanced in his hands . Drac jumped Ray's patron and the dogs with everything were all over the place along with the egg cream which first went up in the air in a spout before joining the dogs and everything on the sidewalk in one hell-of-a-splatter .
Drac proceeded to beat upon the stunned and helpless individual putting him on the ground while punching . A pitiful defense was in time mounted by Drac's sloshed prey . As Drac took his opponent of choice by the head and started ramming it into a wire-glass entrance door we went into Ray's to call the police .
Returning to the street outside Ray's as the counter person was calling the police we saw Drac still ramming repeatedly and very forcefully Ray's drunken patron's head into the glass and we feared that the glass might break and very seriously injure one or both of the combatants so we took action .With our trusty M6 in one hand and out of the way we one-handedly pulled Drac off his prey , took him down putting him on the ground with a knee in his back . Then we sat on him until the police arrived ...all 290 pounds of us . Drac surprisingly sighed and moaned as though he was experiencing a pleasureable activity during all of this .... and he did not struggle or attempt to move .
The 9th precinct arrived with the commander of the precinct leading the arresting team .We turned Drac over to the commander . We feared at this time that we would along with everyone else be arrested since the police simply did not know who had started the fight or who had done whatever and that they would resolve the issues back at the station-house as is usually done .
Since we assumed that we were going away with everyone else , as we stood up before Drac and the commander , we made an attempt to get at least one good picture , the one above .To our surprise and relief 9th precinct personnel helpfully and courteously held Drac for the photo ... and then asked if the picture would be in the Post . We replied that we didn't know .
We were not arrested , Ray's drunken patron was not arrested and Drac was taken to Bellevue for observation .
Two days later Drac approached us on avenue A . We assumed that he would be quite angry with us ... if not shortly become outright violent with us . To our surprise he was very ,very friendly and not at all angry .Indeed quite to the contrary he began smiling and asked if the picture taken turned out well and wondered that since we were familiar with photography if we would take some time and look at some pictures that he had that someone had taken of him recently . Drac , short for Dracula as we later learned , produced a large envelope from which he pulled two 8 x 10 glossy photos of him entirely nude with his legs locked behind his head ... of course exposing everything that one normally obscures .
We told him that they were very nice pictures and that it must take considerable skill to be able to get his legs behind his head like that .
# posted by Bob Arihood @ 9:42 PM 3 Comments 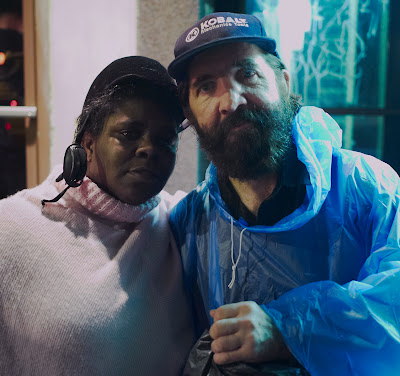 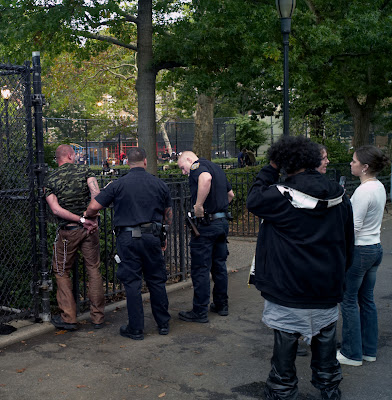 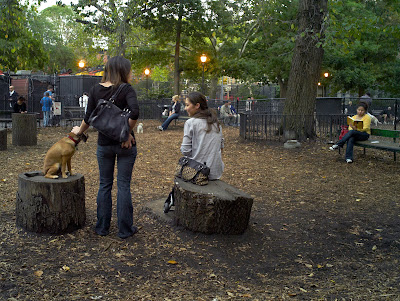 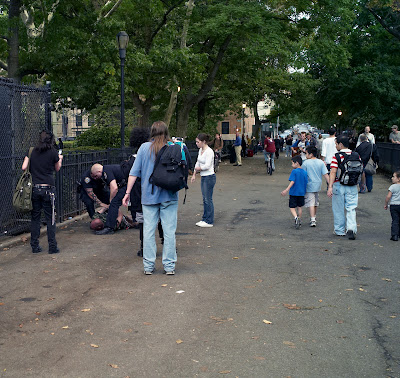 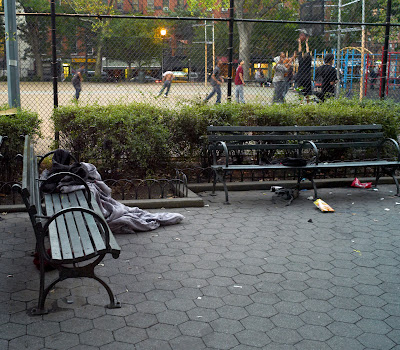 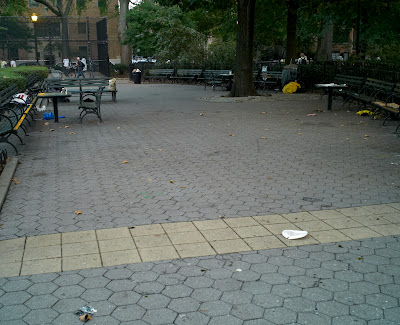 2 ABOVE : the new "Crusty " enclave without occupants due to the presence of police .

The 9th street park traverse , a path for Parks Dept. and NYPD vehicles , divides Tompkins Square Park from east to west with the dog run to the south and basketball courts , handball courts and the new enclave of the "Crusties" ,the replacement for the former "Crusty Row ", to the north . Today the traverse was the scene of a very un-civilised violent clash , invloving local youths and " Crusties", that was right under the noses of the very civilized and fashionable dog run set .
This afternoon just across the traverse from the dog run a man was arrested with police claiming that he had possessed and displayed a knife in addition to resisting his arrest .
As dog owners and passers-by watched , police tried to calm a small crowd of combatants and sort out what had happened and who had done what to whom .
Some at the scene claimed that local youths had been throwing bottles at "Crusties" and that a fight ensued . Additionally , others claimed that this bottle attack was a part of an on-going feud between the local youths and the "Crusties" who have recently moved from the row of seats to the west in TSP known as "Crusty Row" to the small enclave of seats and chess-tables between the ball courts and the park traverse .
It was not clear how the man arrested was involved in the small skirmish but it was clear according to police that he had displayed a knife and had resisted arrest . 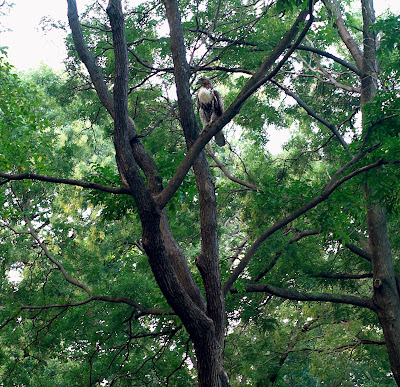 Today we saw our first immature Red Tailed Hawk of the season . The hawk was occupied with the task of clumsily and unsuccessfully hunting for suirrel in Tompkins Square Park.
Usually one or more 9 to 11 month old fully grown though immature Red Tailed hawks occupy Tompkins Square Park from late October to the middle of the following March .
This hawk as do all young hawks has to learn to hunt successfully this fall and winter or perish . Today's hawk though large , beautifully and distinctively marked was having more than its share of trouble trying to catch just one squirrel . Hunting squirrel even in squirrelly TSP requires skills that are not easily learned , even by such a potentially masterful predator as todays impressive appearing bird of prey .
Though we did not see this hawk catch a squirrel this hawk did have a swollen crop indicating that it had caught something earlier and thus would have at least some sustenance today .
# posted by Bob Arihood @ 9:11 PM 3 Comments 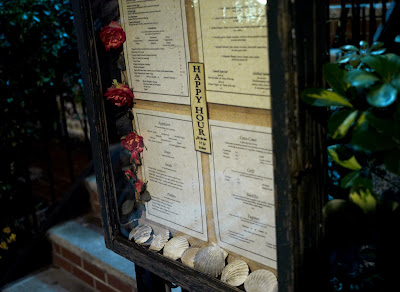 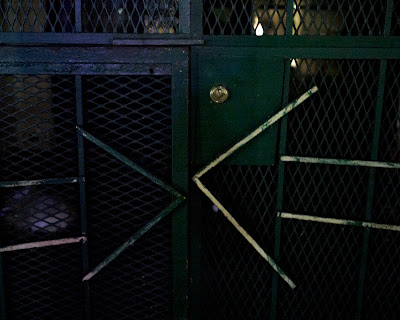 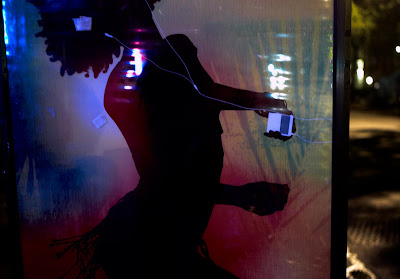 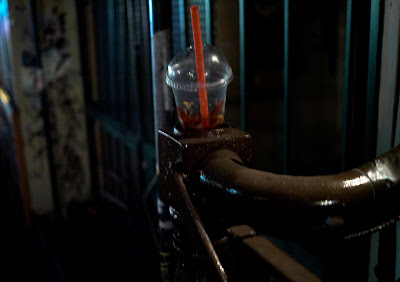 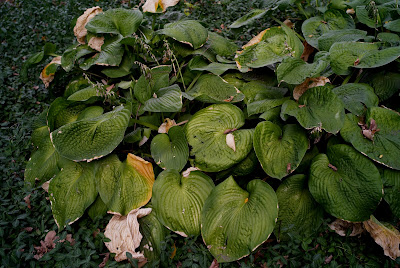 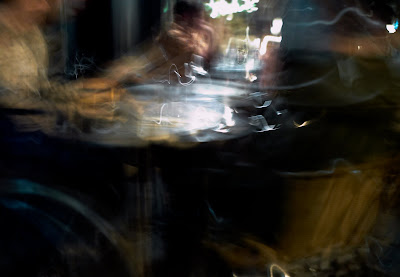 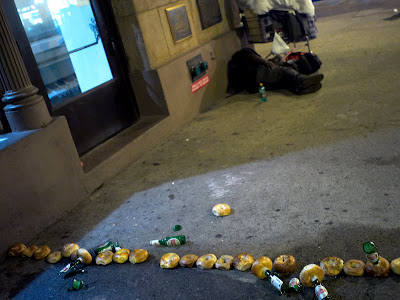 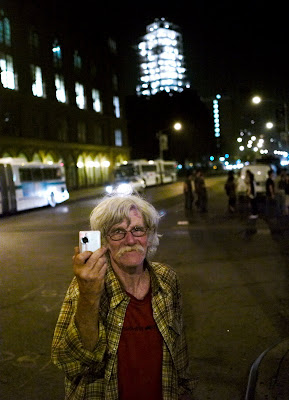 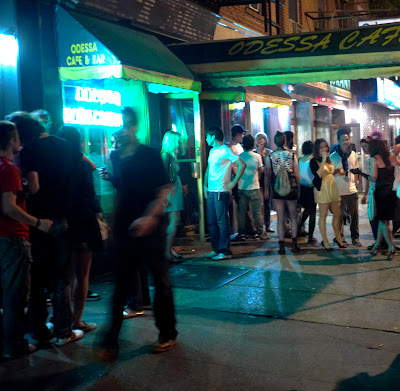 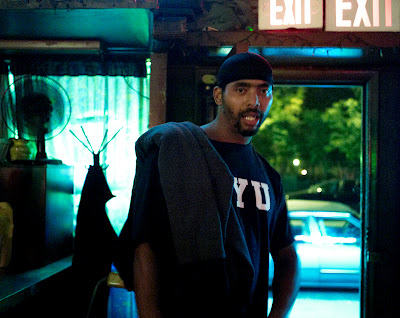 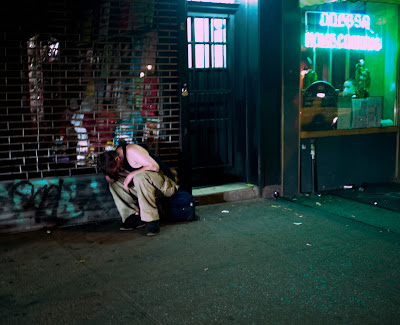 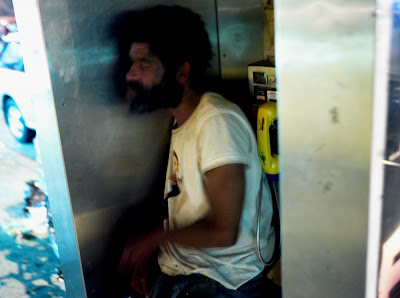 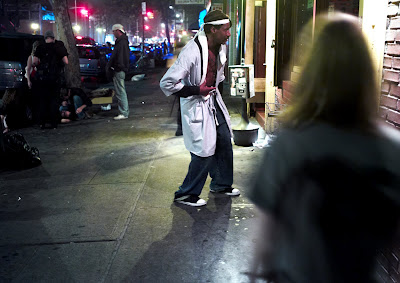 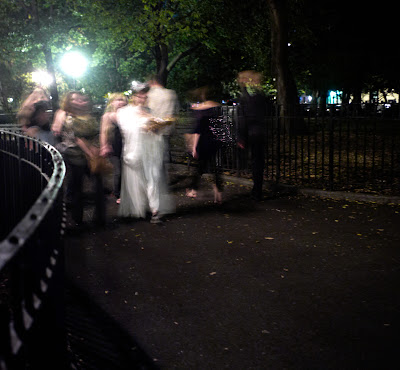 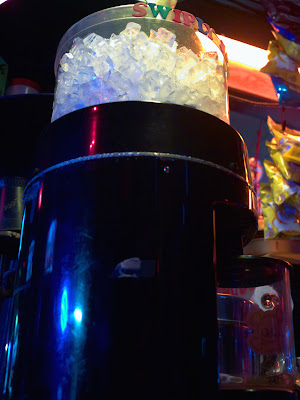 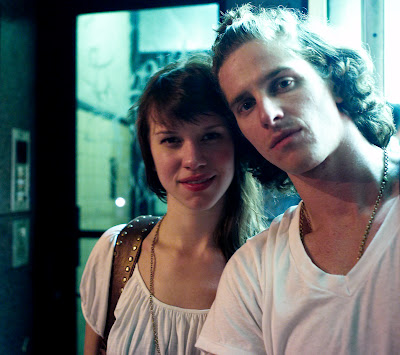