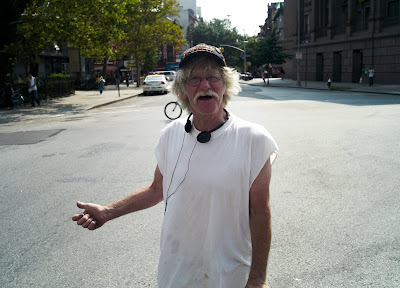 Above , Jim , the only true " Mosaic Man", stands in Astor Place with his back to the beginning of St. Marks Place where his "Mosaic Trail" of mosaic adorned light posts ,storefronts and sidewalks begins .

St. Marks Place runs all of 3 blocks east to Tompkins Square Park and is lined with many of Jim's mosaics . Jim's "Mosaic Trail" was started here at this location in Astor Place 20 years ago on Labor Day. 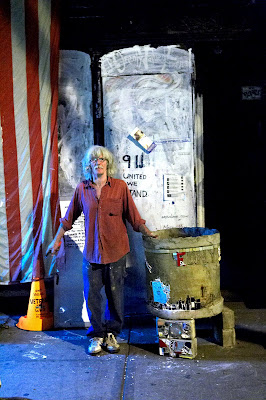 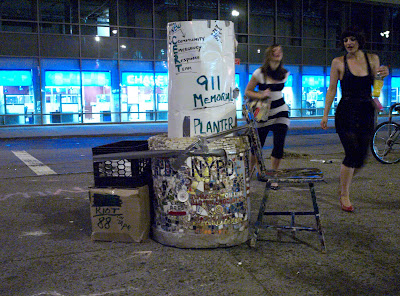 Last night Jim's "9-11 Memorial Planter" stood alone under a street light , backlit by the blue light of the Chase Bank at the base of the latest tower of multi-million dollar condos on Astor Place . Jim and Jesse Jane ( his dog not the porn star ) had been sleeping with the planter here in Astor Place many nights recently but on this night they were able to get a much needed night's sleep off the street in a generous friends apartment .
Today we were told here at NMNL that NYPD has warned Jim to remove the planter and to not sleep in Astor Place .
Jim has nowhere to go to live , he is homeless , and he certainly has no place to put the planter .
Crafting the Memorial Planter has occupied Jim for more than 2 years . It is dedicated to the NYC police officers , NYC firemen and Port of NY Authority officers that died on September 11 , 2001 . Jim has intended to somehow finish the planter and place it at Ground Zero with a tree , a small tree , planted in it .
It seems now that the planter is at risk : it may be simply broken -up and hauled away by the Sanitation Dept. 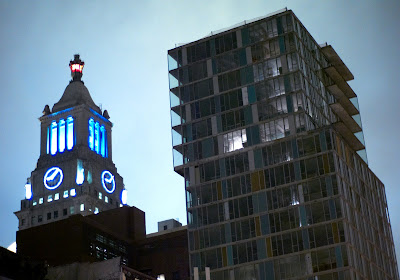 We return again to last September's tower crane accident at 110 3rd avenue and note that after nearly a year little of nothing has been done to punish anyone for the indifferent and incompetent behavior that caused the accident .This was a serious accident which injured 5 people ,crushed a taxi-cab , caused the evacuation of many near-by buildings , shut-down all traffic in the area for close to 24 hours and cost the New York City tax-payer a great deal of money.
As the building's construction proceeds to completion ever so slowly, the workings of the Department of Building's hearing of fact concerning the cause of the so-called accident at 110 3rd avenue also moves ever so slowly . Hearings continue to be moved into the future with the current date for the next set of hearing's being 27 Dec. 2007 . All parties involved in the accident are still apparently preparing to present their cases on this date . Of the parties involved ,so far only Tishman construction has been punished in any way : they have been fined $1500 aqccording to the DOB building profile .
For the details of this crane accident see here at NMNL the 4 post on the subject at the beginning of the October 2006 archive .
We also recomend an article on the event in ENR (Engineering News Record) , 10/9/2006 , Vol. 257 issue 14 , pg 11 , one page . We can not achieve a lasting link to this article . In NYC ,the article can be accessed through the public library ,if you have a library card , at : www.nypl.org
The DOB building profile with the details of complaints , DOB violations , actions and hearingscan be found by going to http://www.nyc.gov/ and clicking on the buildings depatment on the home page drop-down and then selecting burough ,house number and street in the profile selection field .
# posted by Bob Arihood @ 3:18 AM 2 Comments