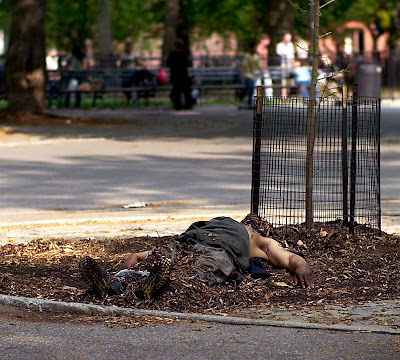 To lie supine before a mere twig of a Dawn Redwood tree in Tompkins Square Park is certainly not common behavior and to do so while covered with earth , leaves and other mystery detritus places this scene clearly in the realm of the at least somewhat bizarre .
Whether an act of devout earth or vegitation worship or a sybaritic revel in an "earth-n-herbal" whole body beauty treatment , the man remained covered and motionless for a few minutes then stood , covered in dirt and plant matter , and walked away seemingly restored by this unusual ritual .
# posted by Bob Arihood @ 3:35 AM 1 Comments 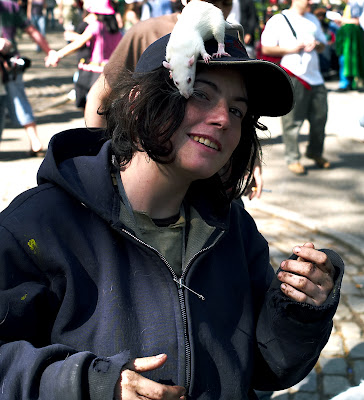 Not that rats are not ubiquitous in Tompkins Square Park today : come sundown in TSP... rats rule . Today it is just that they are not seen much in the company of humans , especially in the day-time , that makes the sighting of a rodent/human pair a scene worthy of a photograph .

Rats were in the past a common East Village pet rivaling pitbulls in rank as the most preferred of pets . Of course there were those humans who prefered snakes , ferrets , lizards or even certain insects but unlike these runners-up companions the rat was a truly dominant player in the realm of interspecies partnerships .

A Radio in Tompkins Square Park ... 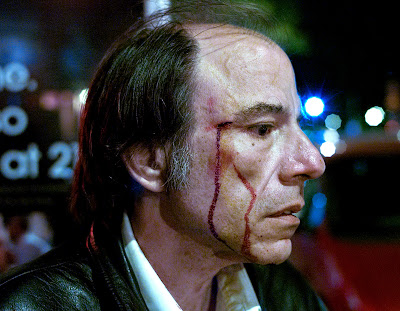 This man was listening to his radio in Tompkins Square Park last week . He was listening to music , something not current or popular . Another man seated near him in the park requested that the radio be tuned to another station broadcasting a particular and popular prize-fight on this evening . The owner of the radio said no emphatically : the other man struck him swiftly and furiously to the side of his face with a cane, smashed the radio and walked away .
# posted by Bob Arihood @ 12:05 AM 0 Comments

The Hat and the Man 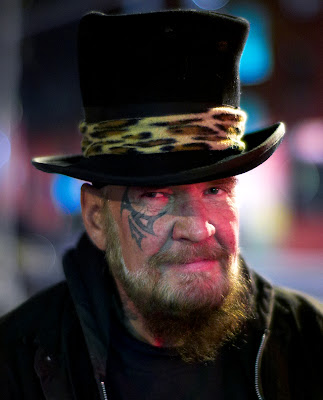 It's Spring and Two New Friends from Tompkins Square Park .... 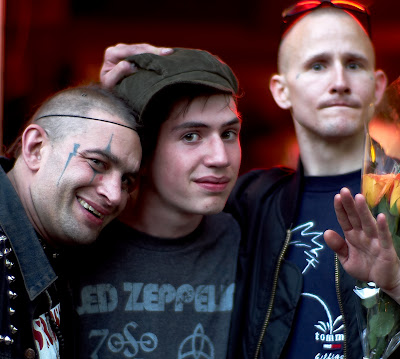 The young man in the middle has no idea of what a life lived in and around Tompkins Square Park can be nor what precipitous and unfavorable ends it can come to , but these two experienced neighborhood regulars , L.E.S. Jewels ( lightening bolt tattoo ) and Sid " The Nazi " , will certainly initiate him in the mysteries of the TSP experience and guide him to enlightenment on these and other matters .
# posted by Bob Arihood @ 1:58 AM 0 Comments 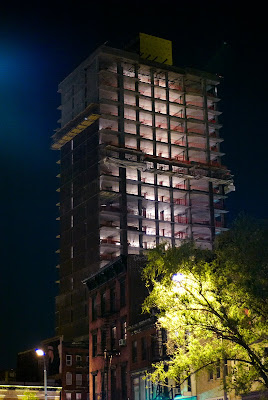 This is our neighborhood and we did not ask for this : we had no say , yes or no , but we are stuck with this monster and more of them will come and they , of course , will displace many of us who have lived here so long .
# posted by Bob Arihood @ 3:00 AM 2 Comments