Will Shovel Anywhere on Avenue A for Money for Booze 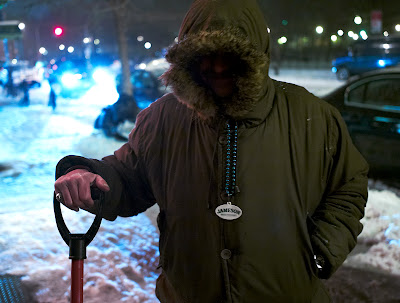 Drug Bust on Avenue A 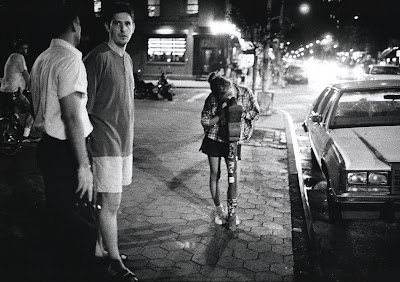 One night not so many years ago during the drug-crazed middle '90s half a dozen young men were arrested and hauled away from a location just above 7th street on avenue A for selling heroin in or near Tompkins Square Park .
Shortly after the arrests , a young woman who had probably just bought her dope from the arrestees just before they were arrested , walked up to a parking meter in front of two of the team of plainclothes cops that had made the arrests and leaned on it , "nodding out " unable to move away from the scene of the arrests because she was too high to do so .The two plainclothes officers watched her for a while and then left the scene .
# posted by Bob Arihood @ 11:10 PM 0 Comments

Lucy's on Avenue A 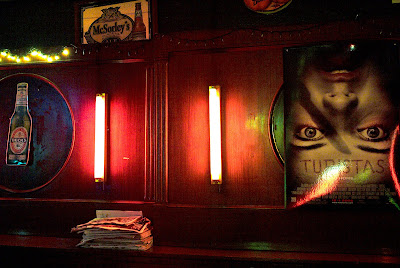 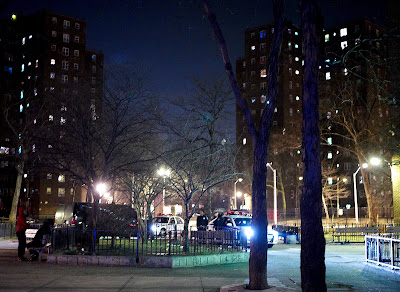 Last night at about 11:30 PM while a level 3 mobilization was in progress at Sullivan and Houston streets in response to the shooting of 2 auxilliary police officers and a bartender , all of whom died , shots were heard on avenue D.
After a full vertical search of 118 avenue D , at least 2 spent 9 mm brass casings were found on the roof of the building.No one was hurt and no suspects were taken into custody.
Such events as this involving the discharge of firearms are still today not infrequent occurances on avenue D and in the eastern reaches of the East Village.
# posted by Bob Arihood @ 3:50 PM 0 Comments 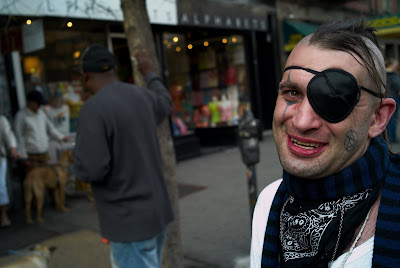 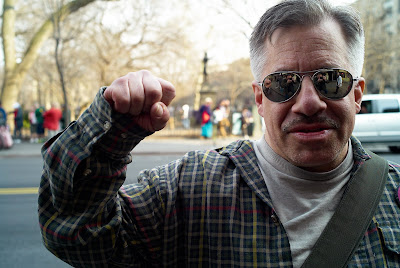 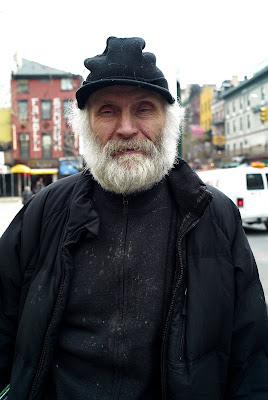 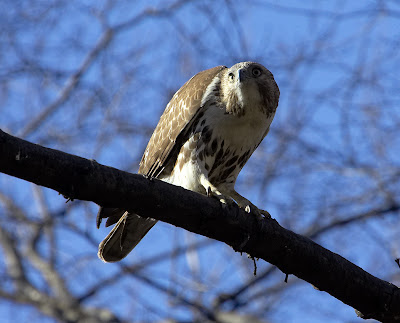 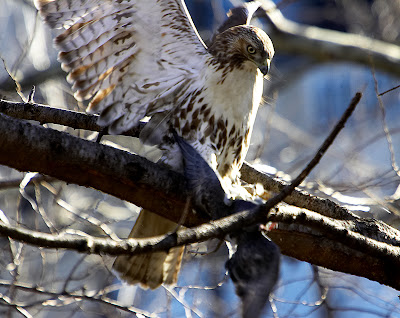 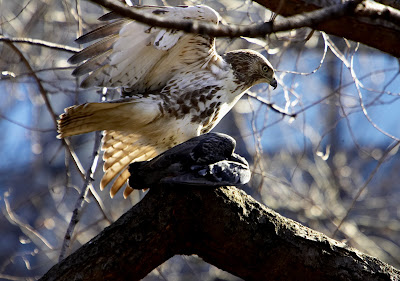 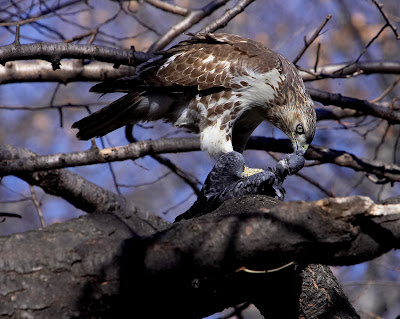 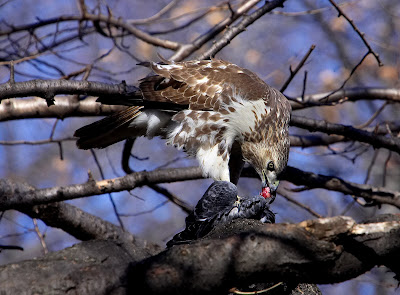 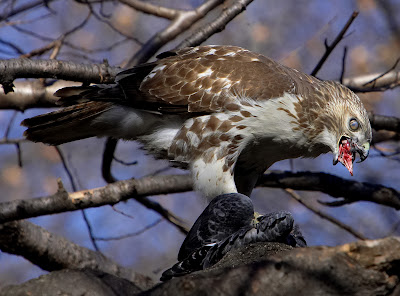 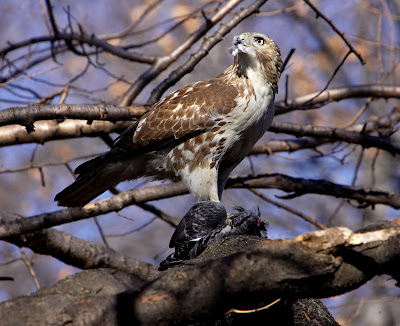 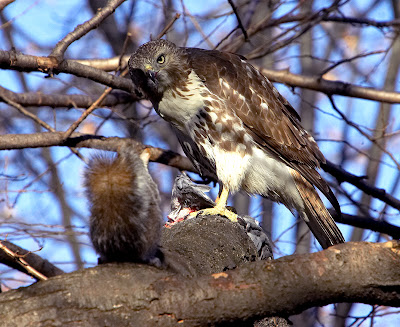 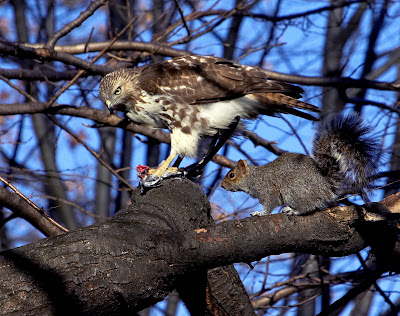 On a warm , sunny Sunday afternoon a hungry , young Red Tailed Hawk , which had spent a very frustrating 3 hours hunting unsuccessfully , spies at 100 yards or so a pidgeon on the lawn in Tompkins Sqare Park . The hawk takes to the air flying in the direction of the pigeon , snatches it out of the air as the pigeon tries to take to the air to escape the attacking hawk .The Sunday afternoon park crowd that had been watching the hawk's afternoon of repeated failures cheers and applauds as the bird of prey bags his bird and takes it to a near-by tree to dismember and eat .
In the tree on a large limb the hawk prepares to eat its afternoon bounty as a small crowd gathers to watch the gory dismembering and consumption of the pidgeon . The hawk begins with the tastiest part of the pigeon , the head ,pulling it off the body slowly and inelegantly ,crunching it with it's beak and then swallowing it whole slowly and with some difficulty .
Not only was there the lingering crowd of humans watching at a distance but some squirrelly residents of the tree , unhappy that the hawk was using their tree for a picnic table , made themselves up-close and uncomfortable pests , creating an even more aggravating and frustrating afternoon for our hawk who just wanted finally... to sate its hunger in relative peace .
Lately several headless pigeon corpses have been found around the park but such was not the fate of this pidgeon .This time this hungry hawk ate not only the desireable head but all of the bird but for a piece of one of it's wings . 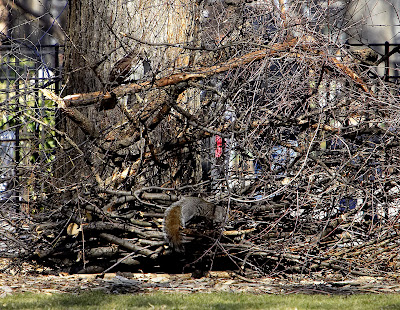 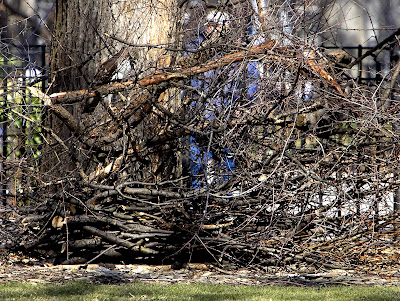 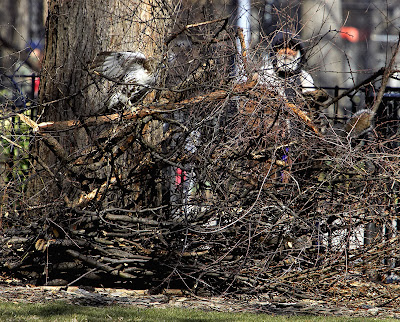 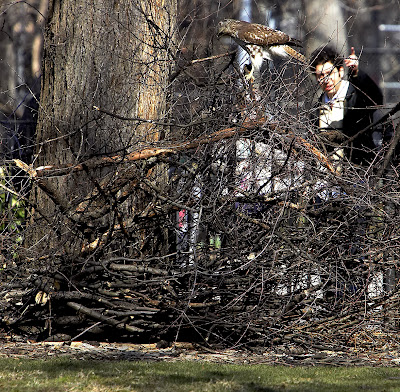 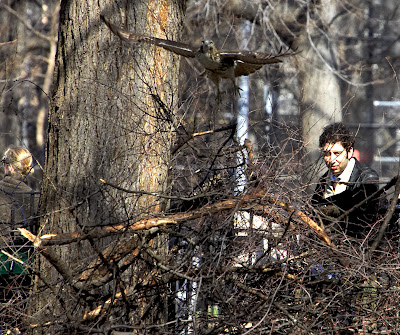 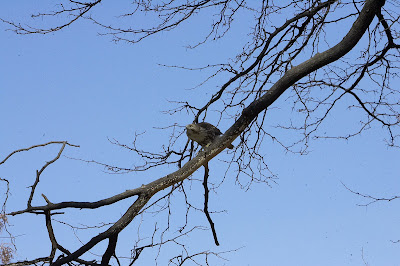 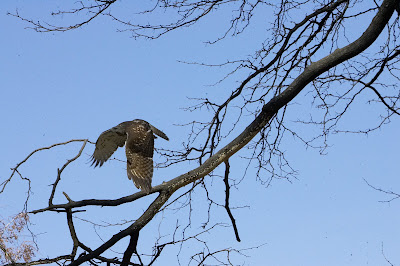 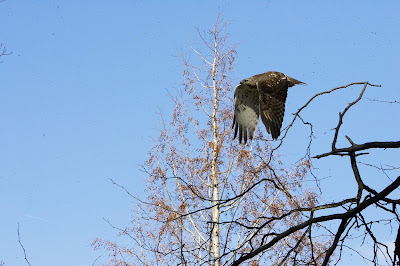 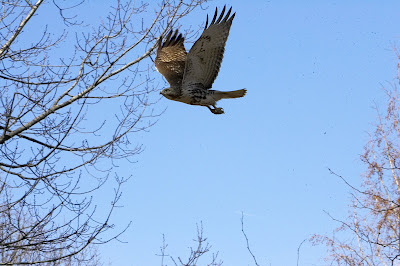 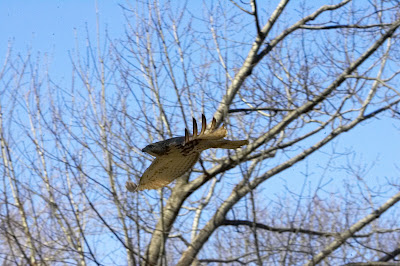