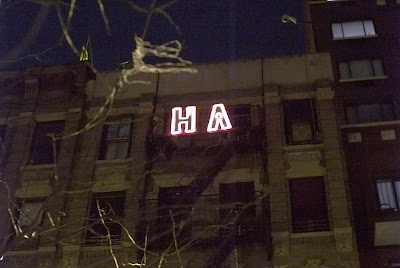 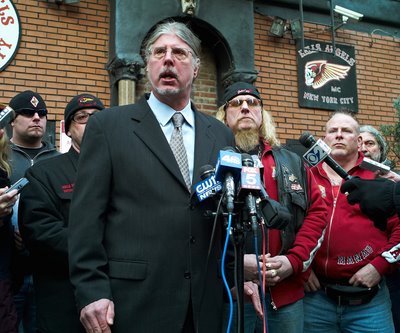 Above : Ron Kuby , attorney for the Hell's Angels , and several Angels gave a Tuesday afternoon press conference at the clubhouse on 3rd street. Mr. Kuby stated emphatically that though one Angel , Richard West , had been held over night at the 9th precinct , as of the time of the conference , no one has been charged with any crime related to the beating of a woman found unconscious near the entrance of the Angel's clubhouse . It is assumed here that NYPD requested the search warrant for the clubhouse because of suspected involvement of one or more of the Angels in the injuring of Roberta Shalaby who was found unconscious and bloody near the front door of the clubhouse around midnight Sunday night . Kuby also claimed that because of the lack of criminal charges against any Angel that the warrant at least in its larger scope was thus unjustified and that the City of New York will be held responsible for a un-warranted search and , among other things , unlawful arrest and federal civil rights abuses. Mr. Kuby made it clear that he would take the city to federal court over this NYPD raid of the Angel's clubhouse.

Mr. Kuby also mentioned that the NYPD had not , at the time of the press conference , provided him with an inventory of the items siezed from the clubhouse including the several surveilance tapes from the many cameras that the Angels maintain to view activities outside their clubhouse and up and down their block on 3rd street .

Finally , though Hell's Angels Motorcycle Club president Brandon Manning's Daily News headline claim that "we don't beat up broads " denies any possibility that any Angel would ever harm a woman , it is true that several news sources have reported that witnesses claim to have seen someone from the clubhouse beat up Ms. Shalaby . Additionally one source reported that NYPD is investigating the possibility that Ms. Shalaby was not beaten but instead was struck in the head by the opening of the door . Just what the truth is in this case at this time is certainly not clear . 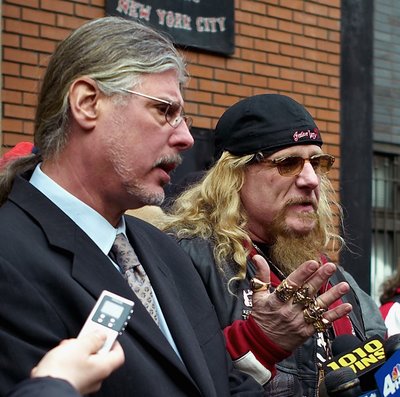 Above : Ron Kuby and New York chapter of the Hell's Angels Motorcycle Club president Brandon Manning speak of the Angel's innocence and of police abuse at the news conference . 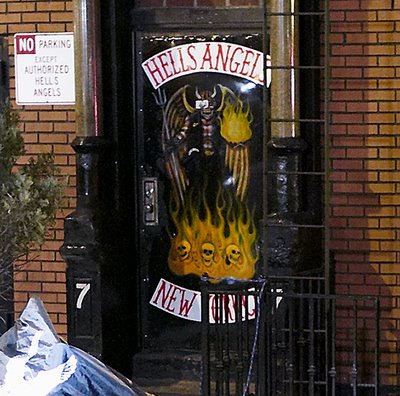 Above : The front door that was removed by police Monday night . This door's hinges were welded to the steel door frame and had to be cut free with a power metal cutting saw . 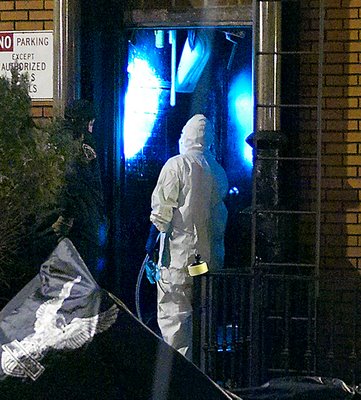 Above :Member of NYPD crime scene unit uses short wavelength light souce to illuminate and locate evidence samples in the front doorway of the clubhouse. Again here , as was noted in part 2 of this post , why this kind of technique at this location at the end of the search of the building when during this half day long search of this building so many NYPD and FDNY personnel have worked in and passed through this portal and entranceway having certainly affected , altered or added to whatever evidence was present . 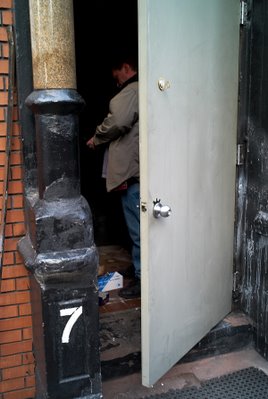 Above : Replacement door in place with lock in process of being installed.

Story will come a little later today or early tomorrow . Please refer to the 2 previous post for more pictures . 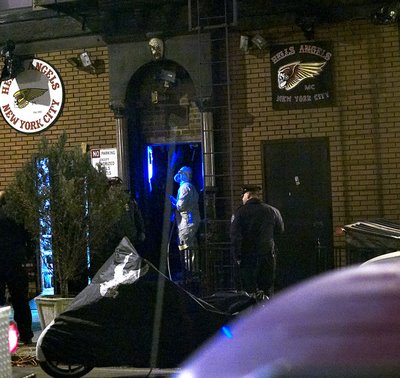 Above and Below : Crime scene unit uses different wave lengths of light to find glowing evidence . The operator of the lighting equipment is wearig as you can see a sort of "moon suit " , mask and , at times , goggles which are either somehow protecting him from actinic light or are being worn to minimize the contamination of the entrance way with irrelavent biologically polluting materials that the operator may introduce inadvertantly . If the latter is the case it seems to be a bit strange that this operation is being done as one of the last operations after tens of NYPD and FDNY personnel have worked in and passed through this portal and entranceway for several hours from late afternoon Monday to early Tuesday morning . . 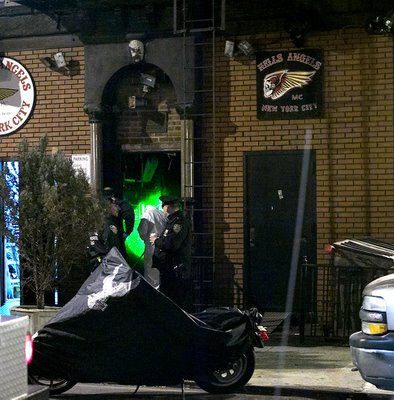 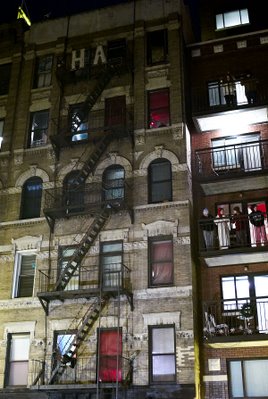 Above : NY law school students watch the activity below from their dorm . A suitable lesson on the process of law right outside the window ? 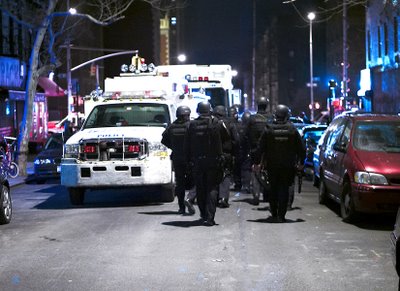 Above and Below : Special operations unit leaves the scene . It still is not clear why several such units were required for an operation to take a clubhouse which harbored no more than 6 Angels at any time during this entire late Monday afternoon raid . . 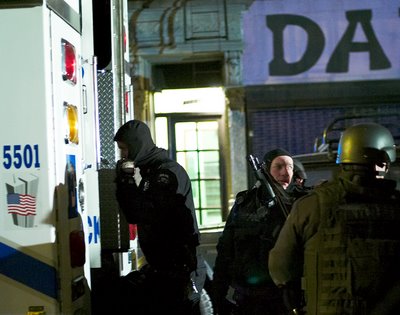 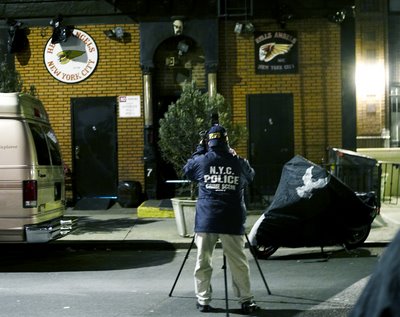 Above : One last picture for the NYPD crime scene unit . It appears that a picture of the Angel's shrubbery was also necessary .


Please go to the 3rd part of this post for more pictures and story . 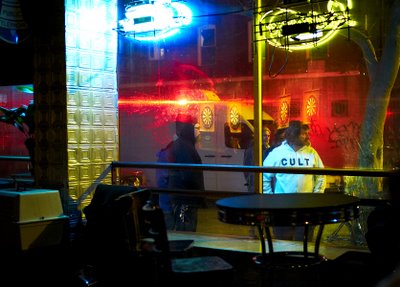 Above : Waiting outside the Edge bar to return to clubhouse . Several of the Angels waited out the raid at this bar which is a very pleasent and friendly little bar . I had a shot of Jameson and 2 Buds while passing some late evening time ... and warming-up . 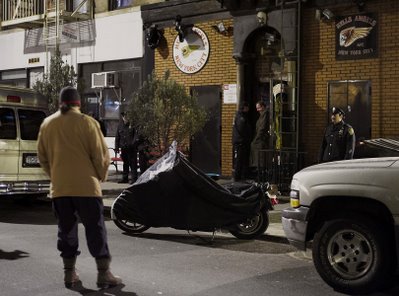 Above : Waiting to be allowed return to clubhouse . 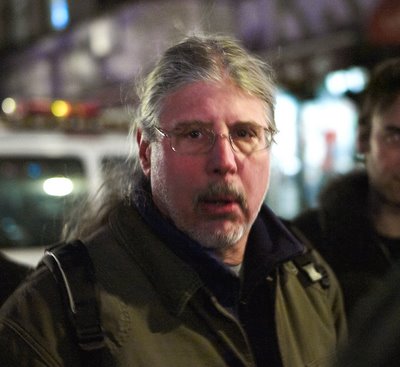 Above : An angry Ron Kuby ,the Angel's attorney , at an early press briefing late Monday afternoon or early evening . 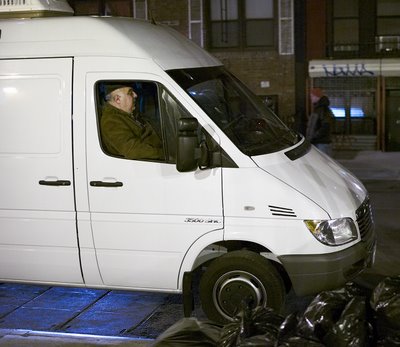 Above :Lt. Albano from NYPD legal department sits in forensic team's van . The Lt. is probably on scene to help insure that the police search of the clubhouse does not wander beyond the scope of the evidentury search warrant in their possession . 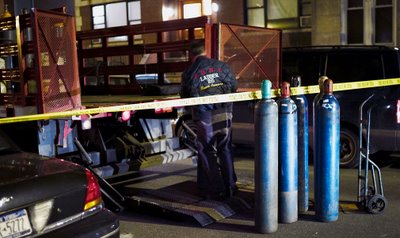 Above : Tanks of nitrous oxide removed from clubhouse are being loaded onto a truck by FDNY . Nitrous oxide as we all know will make you giggle and make a tooth extraction bearable but it will also give your motorcycle engine more horsepower when it is injected into the combustion chamber with the fuel/air mixture . 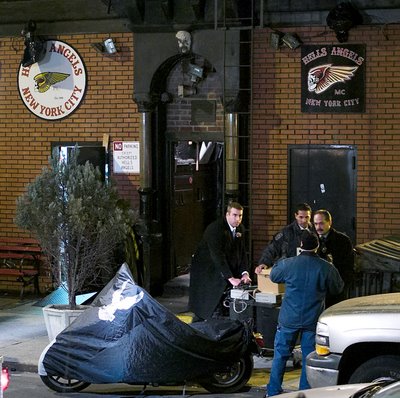 Above : Detectives confront an Angel as they remove evidence ( surveilance system and tapes , hard drives and paper records ) from clubhouse . Large video games were also removed later . There is according to Mr. Kuby no inventory of siezed items available to him as of Tuesday afternoon . 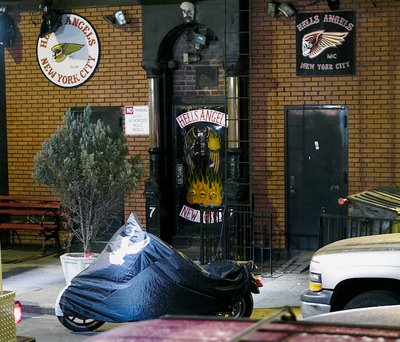 Above and 2 below : Front door of clubhouse which was removed because it was suspected of bearing pertinent evidence . Much has been made of the importance of this door as evidence . 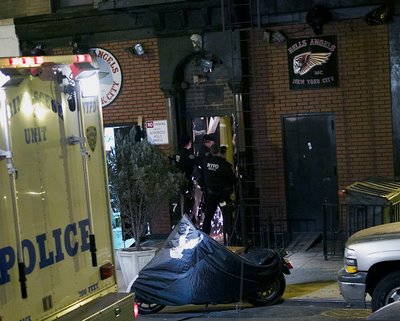 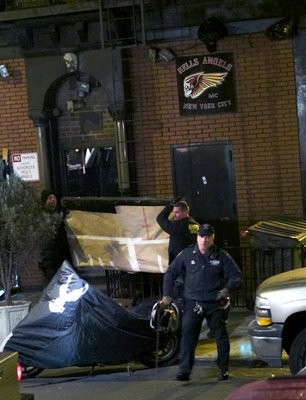 See the second and 3rd part of this post for more pictures and the story of the Monday afternoon NYPD raid on the Hell's Angels clubhouse . 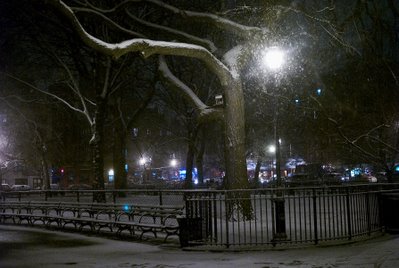 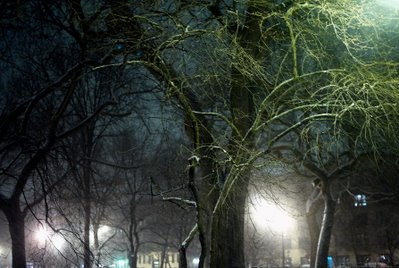 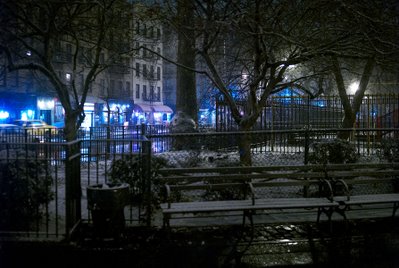 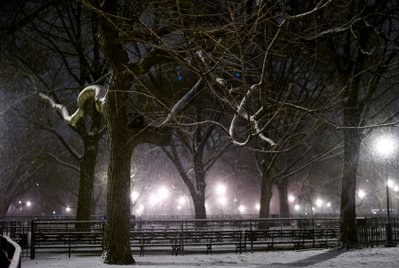 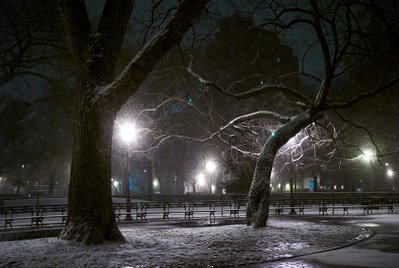 Saturday Night on A 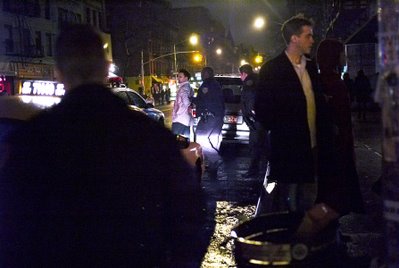 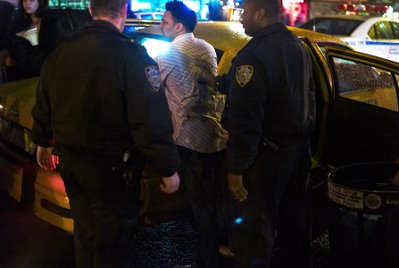 Saturday night , being an unusually warm night for this time of year , brought to the neighborhood the horde that wanders for hour upon hour from bar to bar .The bars and restaurants were full of people , the sidewalks were full of people , and Avenue A was full of cabs . As the evening went on , the liquor was poured again and again and the sidewalk and street became jammed with people and cabs and travel on either was at times brought to a complete halt with confusion ,pollution and altercations the result as pictured above . At the end of the evening ,Sunday morning , at 6th and avenue A an angry customer and a desparate cabdriver went to it with the cabbie being cuffed and hauled away by police .