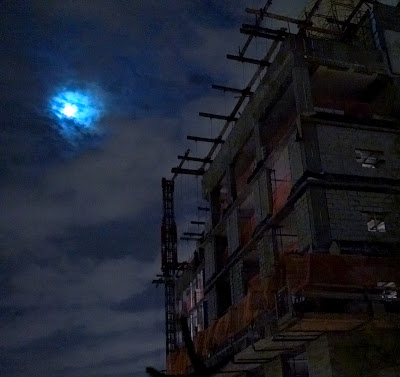 P.S. 25 October , 2007 ...The image above was posted yesterday without text .
Today we noticed that Jeremiah at http://www.vanishingnewyork.blogspot.com/ was moved after viewing the moon-lit scene above to write ...."ah , romance hasn't died in the East Village." . We expand on this theme .
If one for a moment can imagine in a more extensive manner that this moon-lit view of the monstrous archetectural bastard of a machine-for-turning-a-profit under construction is rather a moon-lit view of a portion of the East Village , not just under construction , but also in the process of being replaced , with many of its buildings raised and many of its inhabitants being and having been displaced and replaced ... an East Village , in part at least , certainly ruined and gone , then perhaps we do have here a romance . A very sad romance . A romance represented above in a manner not un-like a number of popular 19th century romantic paintings , most famously perhaps as a painting of an ancient ruined moon-lit abbey and indeed here , just outside the frame below , there remains the bell tower of a ruined St Ann's ... a romance though in this case not with some distant , mysterious dead and ruined past as the subject but a romance with our daily lives and the well-remembered recent past at the fore .
For a considerable number , if not most residents of the East Village , contrary to the claims of Mayor Mike on the John Gambling Show , this "construction boom" , of which this incomplete structure illuminated by an intense but tortured little disc of moon in a cloud-veiled , glowing , blue night sky is a significant and representative example , is not desireable .
Likely most in the community do not want this monster building and they certainly do not want more monster buildings ... nor do they want more NYU students : of course Mayor Mike and his friends do .
With what we hear daily in the street in mind and with the darker spirit of Halloween and Dia de los Muertos upon us we are inspired to surmize that many in this community would happily see Mayor Mike and his entire Daemonium of Lords and Ladies of Mammon appropriately dispatched to dance the fires of hell and roast .
So ... yes Jeremiah , perhaps romance is alive here , but if so , it is a sad and for many here a hopeless , rather sinister and frightening little romance , peopled with numerous self-obsessed , predatory , petty and greedy little monsters , that daily we must live .
# posted by Bob Arihood @ 12:22 AM

Comments:
nice elucidation of the theme, love the crumbling ruins imagery. you do know i was being sarcastic, though, right?

Yes , I know Jeremiah and I was happy to see you make a point of it by noting it on Vanishing New York .

I just felt like expounding on all of this .It gets to be too much watching Mayor Mike and his friends get everything they want by taking , albeit legally , what ever they want and to hell with the ordinary folks that are losing thier homes and community .

As an example I Recently noted on NMNL that the C of O at 120 St marks place was a fraudulent document and that the building was not only unlawfully occupied entirely but that the community facilities agreement which Mr. Shaoul ws not being honored . You perhaps saw that post .Well, on exposing this set of facts another falsified temporary C of O was issued . Of course this C of O though false was also not honored by Mr. Shaoul .

A few days later the DOB apparently approved a post approval ammendment to the approved plans for 120 that radically reduced Mr. Shaouls requirement to provide community facilities space . Now the entire ground floor can be rented for any ordinary commercial use .

Mr. Shaoul was allowed to build a much larger building than the zoning resolution would normally allow by agreeing to provide the cellar ,the ground floor and at least part of the second floor as community facilities . That is by providing space for something like Chabad or doctors offices ,a day care center or like uses . There are as of today no approved community facilities occupants in this building .

The DOB , your DOB , just relieved him of his obligation ( and now he still gets all that extra revenue from a larger out-sized building) at the stroke of the pen . They , Mr. Shaoul and his ilk , get away with whatever and everyone from Mayor Mike down looks the other way , indeed they even bother to bend over backwards to make it all legal .

Jeremiah , I have just had it . The law does not seem to apply to the developement and land owning class ... and do not here assume that I have any socialist leanings , I do not but I do expect lawful behavior to be enforced ...even among those that have great wealth and thus great power . I expect accountability from those with power. They are obligated to act responsibly in thier actions that effect the lives of all of us little folks .

i hear you. i am continually, it seems daily, stunned by the relentlessness of bloomberg's bulldozer (inherited from giuliani). i keep waiting to stop being stunned and just go numb. that would be a relief.

The radio show Bob Arihood refers to can be listened to with this link and hear him tell me just a small group of people feel this way. He almost says it like he believes it but the reality is people our outraged city wide by this tsunami of community crushing development --welcome to the new hideous New York thanks to the Bloomberg administration.
+ go to link
pick the top option for "archived link" which gives you the stream with out down load
move the cursor to 29 minutes (almost the end!!!)
Suzannah B. Troy


This building is the most sky piercing hideous mega dorm yet built by the East Village's very own evil empire, NYU and the facade from 1847 of St. Ann's is like an NYU badge of shame but NYU is stupid to pathetic to even get it. How did Webster Hall get landmark protection but not St. Ann's? Because St. Ann's was a historical site although not yet protected from the predatory destoyer NYU-John Sexton, the USPS service was legally required to notify the State of NY of their intention to sell air space over St. Ann's. Try and get anything delivered by the USPS with out putting on a stamp and see if it gets delivered. The photo is great and it is the perfect time of year with Halloween so near...the horror of NYU's destruction from Stuy Town is either completely lost on these students or they embrace John Sexton's rapacious greed and therefore NYU's logo should be the hideous NYU Pallidim dorm with a dollar bill and not our historic Washington Square Arch because NYU has destroyed our historic area and the mayor, mega millionaire city planner Amanda Burden and John Sexton -- 3 dear friends have done everything but supply trains, buses and NYU trolleys to move us out.

Stuy Town was meant to be affordable housing for vets returning from WW2, never housing for NYU students. Like Viet Nam, our vets are returning home not getting the care they need, here in NYC times get tougher for all those that are not rich but the mayor only cares about NYU, Cooper Union, SVA, The New School and NY Law Student housing and under Burden and Bloomberg, Cooper will tear down it's Science building, supersize and lease for 99 years which underscores this is all about powerful real estate magnates abusing their not for profit status to abuse, destroy and to continue to push out community members to make room for the mayor's priorities with is college kids. The Cooper Union art students are not anti-establishment but only care about one thing and one thing only -- their free tutition. They said they don't like the new building that will replace their studio space but they had no idea that St. George fought and lost Cooper Union to not have it be built tall enough to block the light of their historic stained glass windows.

It is city wide -- and it is Bloomberg and his mega rich power broker friends that bring us this new hideous new york with glass mirrors that reflected a history destroyed and communitiest that made the areas so desireabe to greedy developers like Columbia University, NYU, Cooper Union, Ratner so desirable...Welcome to bloomberg's hideous new newyork a big generic soulless shopping mall....

The east village has been mega dormed to death
NYU no. 1, Cooper Union, The New School, NY Law, SVA use the term community facility to supersize and exclude our community and they should give us community outreach resource centers in every mega dorm plus the building on Lafeyette that say NYU housing because evictions continue to rise!
Under the bloomberg administration the East Village, LES and Bowery look like a bad xerox of midtown.

it's a terrifying photo, and what it signifies is so beyond disheartening. what's worse is, as you articulate above, that these forces are bigger than any of us. and that is the most terrifying thing of all.

The majority of New Yorker are outraged but we could not get it together to unite to express our outrage for the city wide tsunami of community crushing development. I tried and I not I was not alone trying to organize a massive rally by City Hall. There are more photos that convey how hideous and horrifying this mega dorm at 120 East 12th Street is, or better yet come in person and be our witness... and I do believe more infrastructure related issues will come from this as well as green space related problems like the flooding we now see on the streets and again it is city wide.