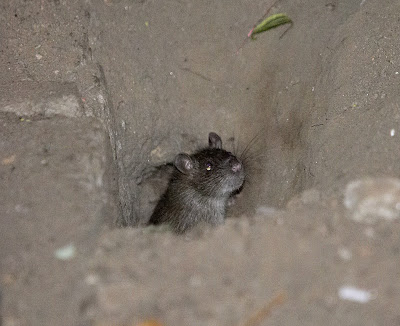 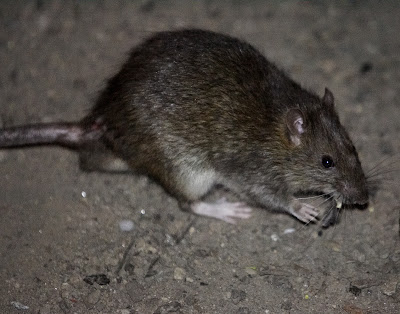 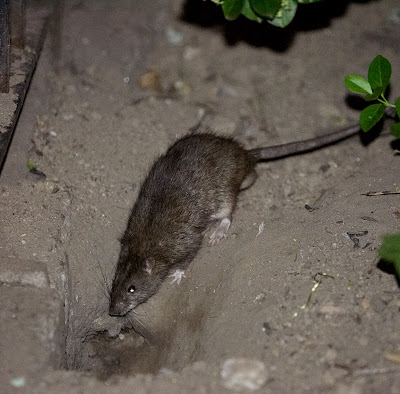 ABOVE : Male rats in and near the re-opened rat-hole under the shrub near the playground water fountain on Sunday night .
For a few weeks we here at NMNL have been working on a sort of natural history of the rats of Tompkins Square Park .The rats are a big part of TSP and at night they do most certainly Rule .They have earned their condign attention in the form of their own natural history.
We were taking our time doing the observation , picture-taking and research . The natural history was to be presented over several posts with entertaining anecdotal material as well as detailed observations of rats ,their ways and their homes in TSP.
A few days ago we were apprised of rumors that one or more local newspapers had decided to possibly do stories on just exactly our subject ,the rats of Tompkins Square Park . Indeed we even heard rumors that some one in the news bussiness had asked some in authority in 3 different local or city-wide government agencies if there were a rat problem in Tompkins Square Park with a rumored resounding and certain no as the answer from these government officials.
Surprisingly on Saturday , though a rat problem was rumored to have been reported to not exist in TSP , quantities of dry earth were used to fill-in several rat-holes in at least 3 different locations near the playground near the park entrance at St Marks Place and avenue A .
We have thus decided to present this too early and hastily prepared post in response to the situation described above as Part 1 of The Rats of Tompkins Square Park .
Most consider rats to be a problem in any number . Tompkins Square Park likely does not have the worst of the city park rat infestations , for instance Union Square Park from what we have observed may well have a more serious one . But it is true that there is a large number of rats in TSP . On Thursday night we photographed approximately 150 rats on the west edge of TSP in a period of 2 hours just after sundown when rats are most active . Some rats were likely photographed more than once .
To see the little critters more clearly just click on the image . 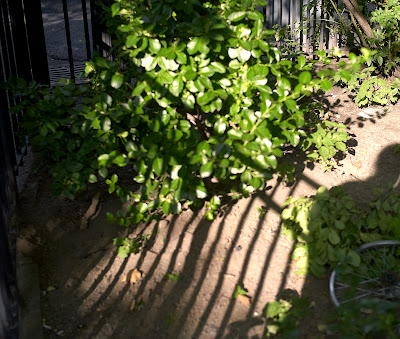 Above several rat-holes near the playground water fountain were filled-in Saturday but by Saturday evenining one of the larger holes was being opened-up below by a hardworking rat . By Sunday afternoon at least 4 holes around this shrub had been re-opened by the diligent and hardworking rats. 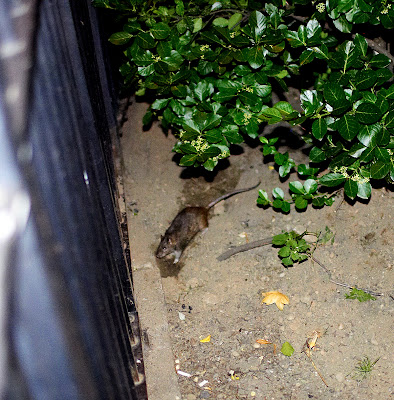 BELOW : Some more rat-holes that were filled-in Saturday at other locations around but still near the playground at the St Marks Place and avenue A entrance to TSP. 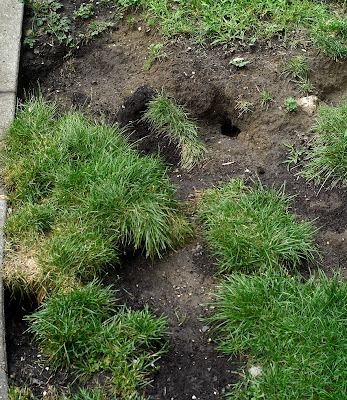 ABOVE and BELOW :Before-and-after pictures of a complex of filled-in rat-holes about 75 ft from the playground. Some sparrows are taking an extended dust-bath in the new , dry dirt . One hole of the several previous holes was re-opened by hardworking rats by Sunday afternoon 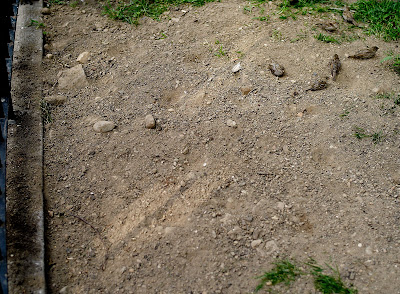 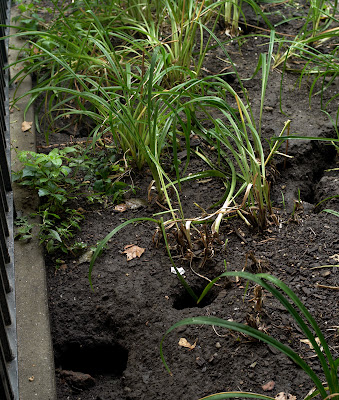 ABOVE and BELOW :Before-and -after pictures of some filled-in rat-holes near the playground 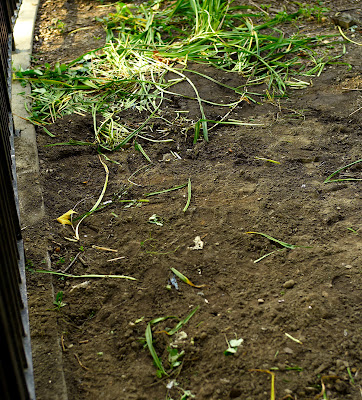 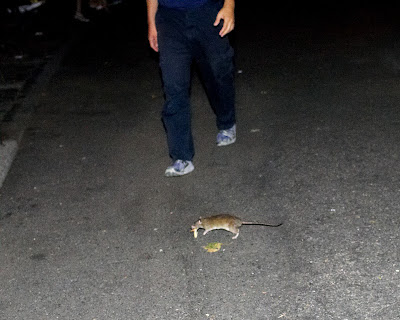 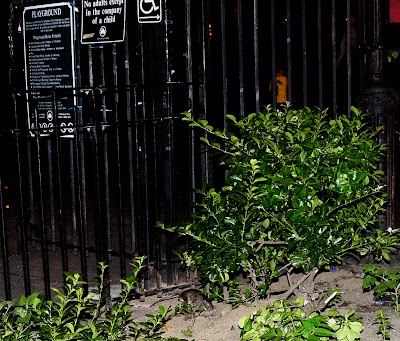 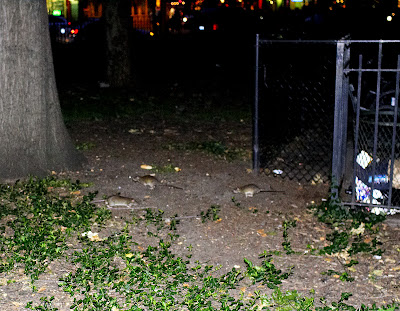 Three rats going-and-coming between a plentiful food supply on the park grounds and the complex of burrows under the large evergreen shrub that is their home near the 7th st. and avenue A entrance to TSP 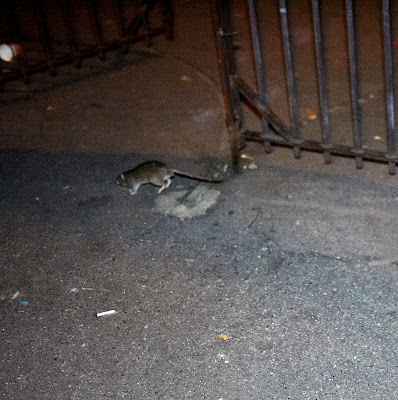 Foraging at the entrance to the playground 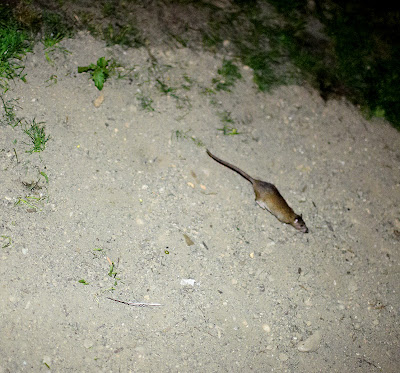 Searching for a hole that was once right here. By Sunday afternoon one hole was re-opened by the rats at this location . 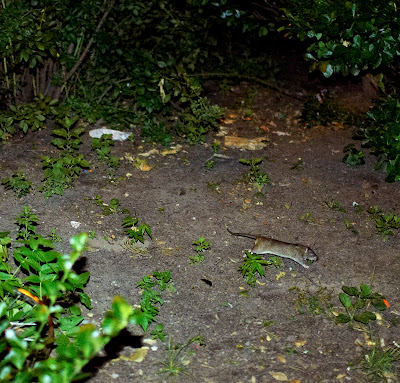 Scurrying from a rat-hole to the cover provided by a shrub . 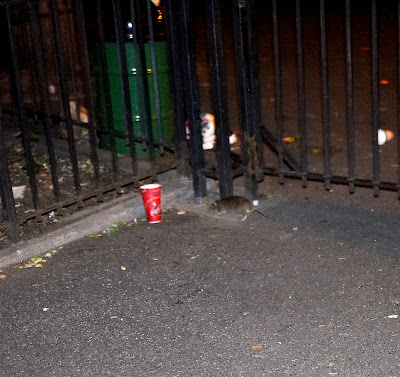 Foraging near a stuffed garbage receptacle at the entrance to the playground. 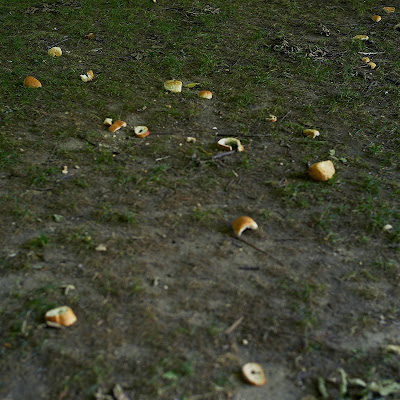 Well-meaning animal lovers cast bread on the lawn for the pidgeons and squirrels who can not possibly eat all , with the rats eating the lawn left-overs . 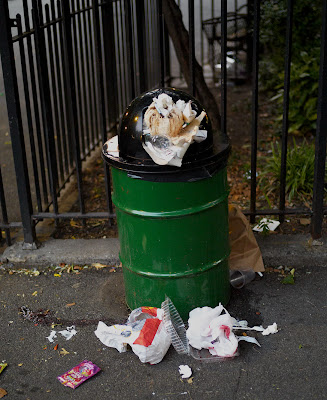 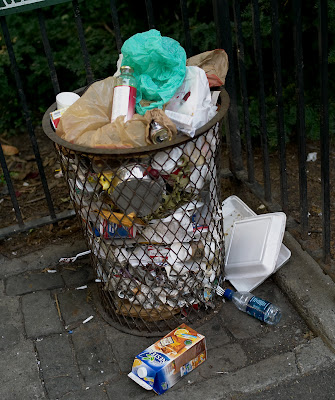 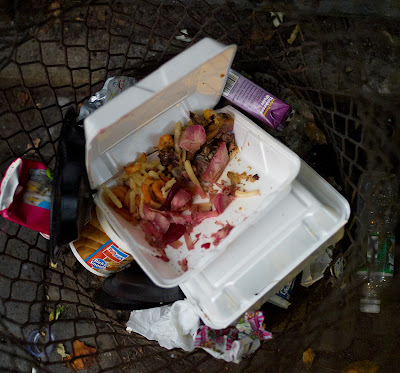 Comments:
it would help a lot if they emptied those garbage cans more often.

Lots of food to eat and earth to dig in. TSP will always have rats.