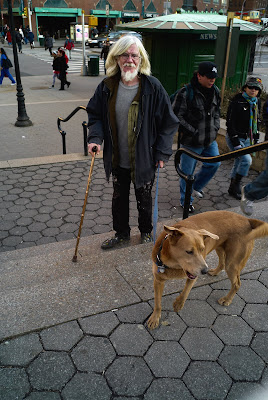 Jim and Jesse now go to Union Square Park more often than they do Tompkins Square Park because , according to Jim , TSP is not where the action is and Union Square is .
Jesse and Jim were at the dog run ,which is cleaner than the TSP run , and Jesse was obssessed of a dog -saliva -soaked green tennis ball which gooey "spit-ball" I was elected to throw across the run for Jesse to catch and return for another throw ...for ever and ever and ever....
Jim has been finishing a mosaic job which includes the interiors of the restrooms and more at a new bar ,Porno Dog Tavern , next to Crif Dog on St. Marks Place between ave. A and 1st ave. The new bar will open soon .
# posted by Bob Arihood @ 1:50 AM