A Tough August for L.E.S. Jewels 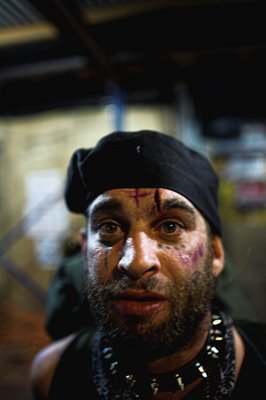 On the 14th of August, rebellious punks rioted with police outside the First Unitarian Church on Chestnut Street in Philadelphia where " Pointless Fest 2006" , a multi-day punk festival , was being held . During the riot cops clobbered a number of individuals with their clubs and among those so wounded was our own local L.E.S. Jewels who received a nasty , large gash above his left eye . Jewels , now back from Philly might hope to relax and enjoy the lazy days of late summer in TSP but for the fact that cops here arrested him in Tompkins Square Park for an "un-opened " beer yesterday . Now after having spent a night in jail and back out in the street , he must prepare for a day in court tomorrow where a judge hearing another set of charges against him from a month ago will determine his near future which will possibly include some more time in jail . In a recent post on this blog I noted that Jewels had broken a glass recklessly in the near presence of an NYU student and for this action was charged with reckless endangerment and disorderly conduct ,both of which charges can earn Jewels some free room and board downtown ... if the judge so decides .

P.S. 26 August 2006: It seems that we may have been mislead by a witness and in reporting the facts of the above post we were stating things that were possibly not true , thus the above post requires some elaboration and possibly some correcting .

According to some witnesses to the riot in Philly , though Jewels ,who may have participated in the instigating of the riot , was struck over the back with a cops club , it was not a clubbing to his face that created the large gash above his eye . There was Mace or some such gas that was used on the crowd and as most of those rioting , Jewels ran from the scene to be clear of the gas . Jewels ran for a few blocks to Paradise City ,a Philly squat , to escape from the police that were chasing him . Running into the building he somehow ran into a door cutting a gash above his right eye . Which version , if either , is true is hard to say but Jewels does have one hell-of -a gash above his left eye and due to a judge's decision in a court here today may be in jail tonight . I did not see him on the street tonight . 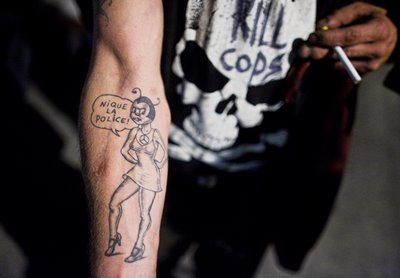 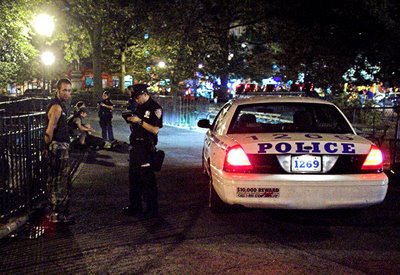 In the last 2 days a number of arrests ,perhaps as many as a dozen , have been made in Tompkins Square Park , on avenue A and on 1st avenue . In the neighborhood , some have been for the arrests saying that they are justified and proper and some have been against them saying that they are for nothing but suspect and trivial infractions .Some see the arrests as a proper and just cleaning up of the neighborhood and some see them as an unfair harassment that is intended to drive them out of what they feel is their own neighborhood .Needless to say that among the the freinds and associates of those arrested there is considerable anger and also some considerable uneasiness since they fear that they may be targeted unfairly for a next series of arrests in the coming days .

Back Home at 120 St Marks Place 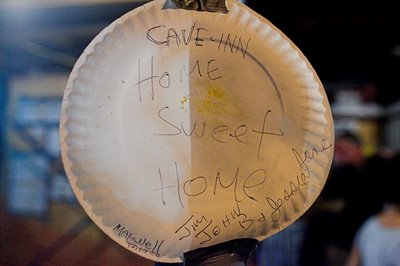 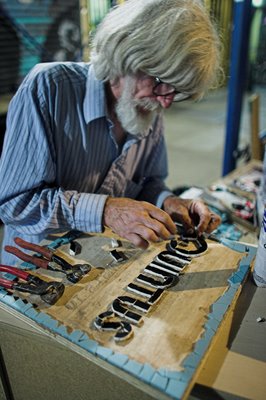 Tonight Jim was at work on a new mosaic that when finished will be photographed for use on a CD insert for some one's new album . Jesse Jane was asleep at his feet and his assistant for his larger projects ,John Dolan , was reading the paper not far away . They all intend to sleep on the sidewalk tonight at 120 St. Marks Place .

Today in the afternoon police officers,I believe including a sergeant , told Jim that he could not sleep on the sidewalk at 120 St. Marks Place . Who knows whether they will enforce their order tonight . We certainly hope not . 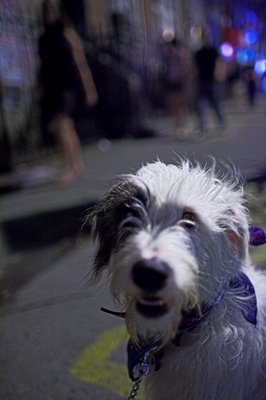 Stanley and Darth at Ray's 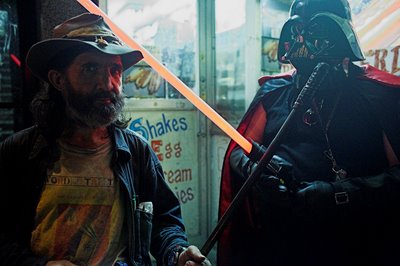 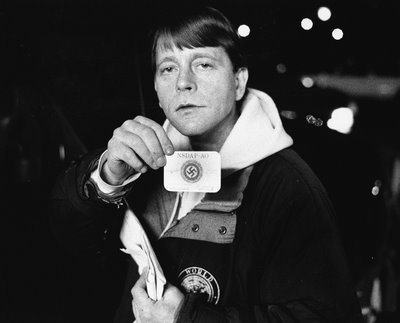 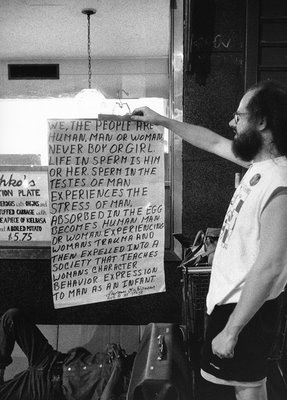 Lawrence's treatise on sperm and other things 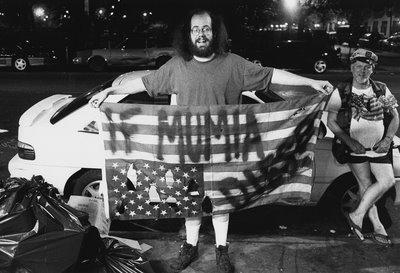 Richie with upside- down flag . Loanshark Bob in bacground 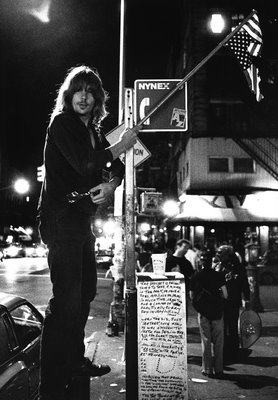 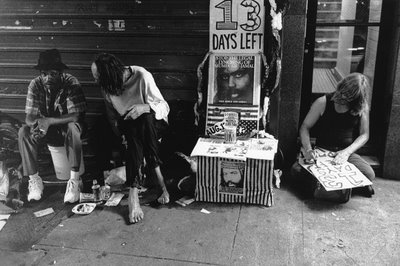 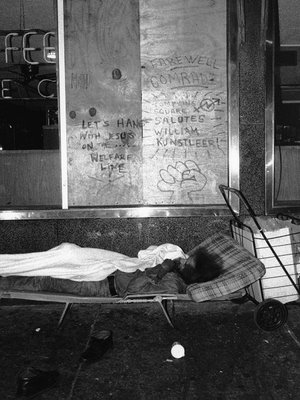 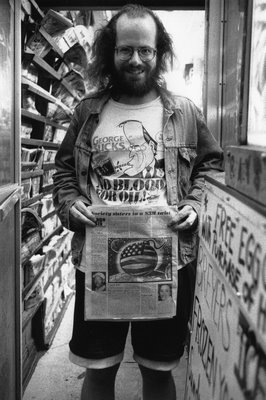 Above : Richie with bomb. Below : Trilateral commission protest 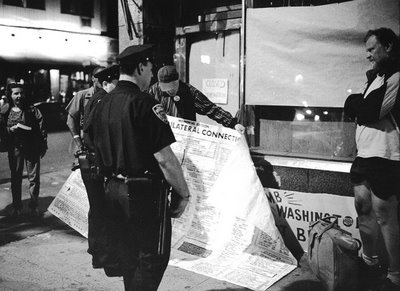 As we all know cities change and neighborhoods change ; sometimes for the better , sometimes for the worse. The piece of filthy , stained and cluttered sidewalk and the kind of folks that have gathered on it in front of Ray's Candy Store certainly has not been an exception . This special stretch of sidewalk , still filthy and cluttered , which was once a political hotbed has changed considerably and today shows little sign of any political expression .There is still loud crazieness and certainly much drunkeness and drugs but not much is said political . This was not the case as the pictures above , from 5 to 10 years ago, show .This little place was a forum in the classical sense , hosting almost everyday ,at least in warm weather , a demonstration of something .Regularly someone was expressing a particular political affiliation or treatise for any passer-by that would listen . But for an occasional cop or two , free speach was the rule . Pretty much all of the extreme gamut of political alternatives was proselytized ,no matter how strange , radical , rediculous or offensive .One night I actually witnessed some of the local communists and Nazis drinking 40 oz. Buds together ,shaking hands , strangely reprising the Hitler/ Stalin comradeship. But people were not always freindly and they often argued and even fought physically over their differences . Those participating in this forum frequently drank,often buying illegally their 40 oz. Buds from un-licensed Ray's , with the drinking usually making the confrontations and resulting conflict all the more intense . 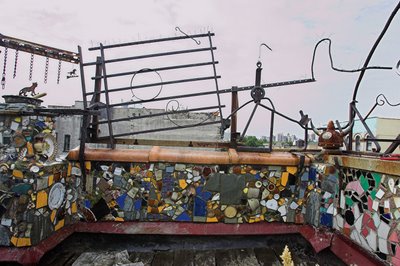 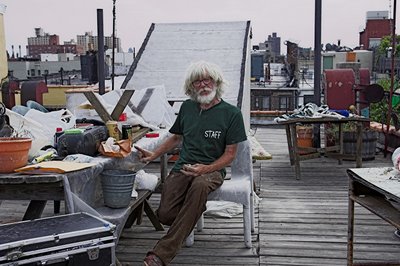 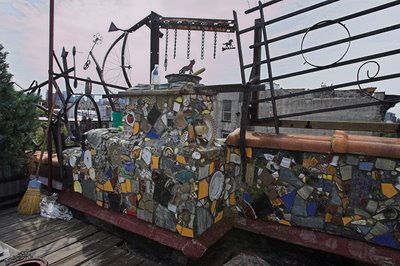 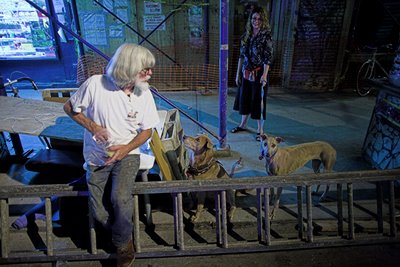 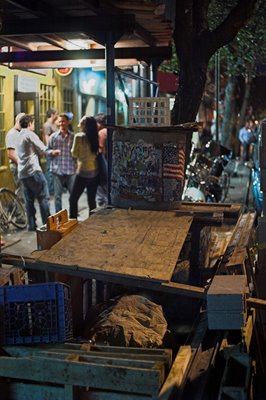 For the last few days Jim , with Jesse Jane , has been living and working on the roof of a building east of Tompkins Square Park repairing and expanding a mosaic covering for the building's parapet . This job is limited in scope and extent and will end soon . It is not clear what is going to happen at the Village Pour House ,the mosaic construction there is on hold . Jim and Jesse Jane may go to Vermont for a couple of weeks to work but beyound that there is little that is certain .Jim seems to have a number of possible future jobs but money is in short supply for Jim since many people see Jim as desparate and thus seem to feel free to exploit that condition offering as little as possible as pay for his labor . The overall situation for Jim and Jesse Jane is very difficult .

Recently , on several nights , Jim and Jesse Jane were back at 120 St. Marks Place .Though friends still come by occasionly to socialize , Jim and Jesse Jane still must later sleep on the sidewalk as others surrounding them stand outside a bar engaged in spirited and loud bar conversations . 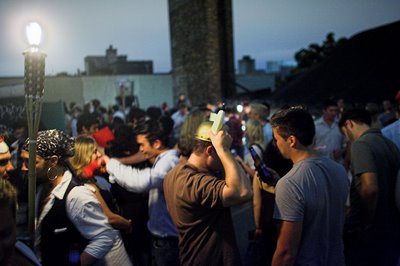 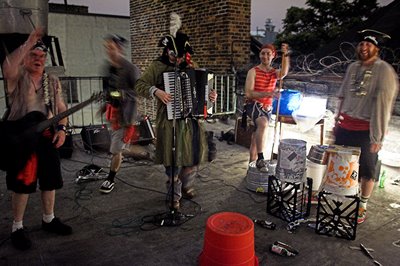 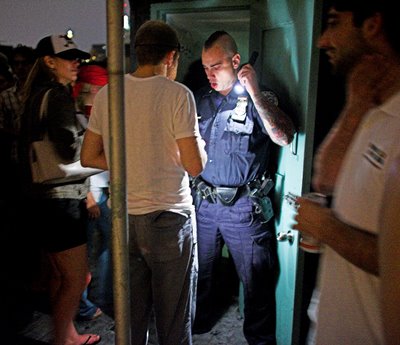 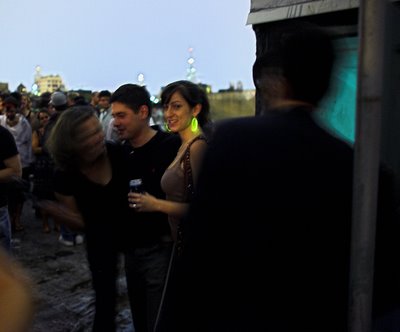 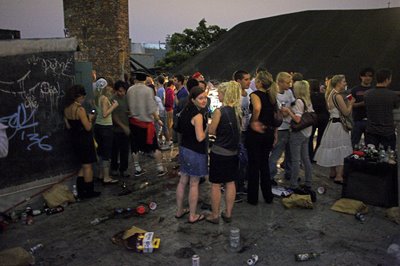 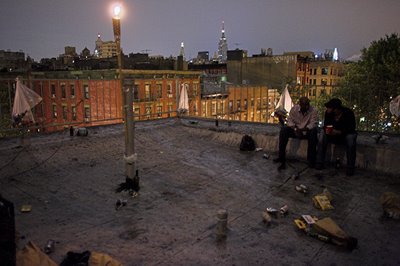 Saturday night , it was clear , was a dud of an evening ,little of nothing going on ,the East Village was dead. I was standing in front of Ray's candy store as is usual , but with nothing to do and no one to talk to .Nothing was happening anywhere and thus nothing of significance to photograph. All of a sudden I heard some loud music ,I looked up towards the sound and saw a roof filled with people ,many hanging over the railing looking down over the street and yelling . It was a party .

At the corner of 7th and avenue A , above the bar Niagara on top of the building there was a huge party with loud music playing and lots of people drinking lots of beer . With nothing else to do , it seemed like the only alternative at the time ,I headed to where it was all happening , up on the roof . The street level door to the building was open , so like many,many others I just walked in and climbed the beer bottle strewn and drunk lined stairs to the roof . The crowd was large to the point of overflowing , indeed , people were hanging over the railing ,beers were falling to the street and some individuals were climbing to the roof of the building next door to find a relatively private place to urinate . This couldn't, of course , go on forever un-noticed by the neighbors and the authorities . Someone would certainly call the police .

A short time after I reached the summit and was confronted with a daunting crowd to navigate my way through ,the police arrived . I.D.s were checked and checked and.... people left ,perhaps half the crowd left for one reason or another right away . Afterall who wants to drink beer with cops around especially if you are underage ...right? Well ...eventually the cops left and the party picked up a bit .With fewer people, there was now room to maneuver ,enjoy the veiw and the party .... and it was also less likely that the overloaded roof structure would collapse . The band ,"The Scurvy Pirates" played their version of pirate rock and the crowd , now smaller , drank on. This is how it was this last Saturday night in this neighborhood .