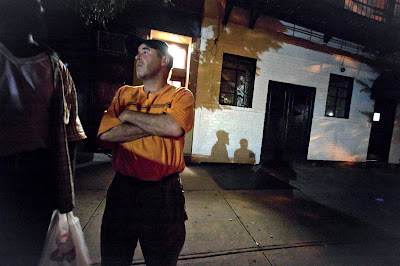 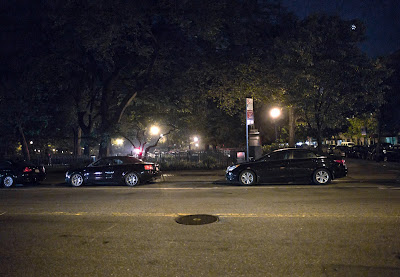 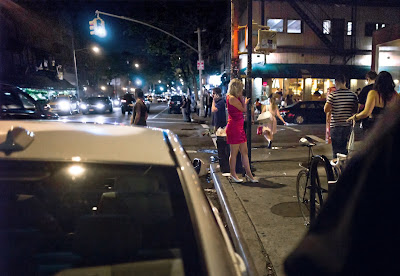 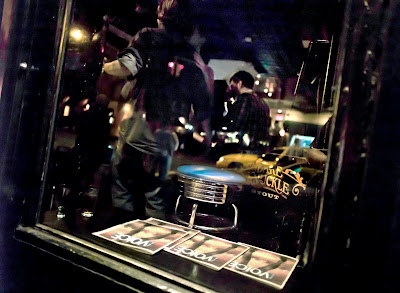 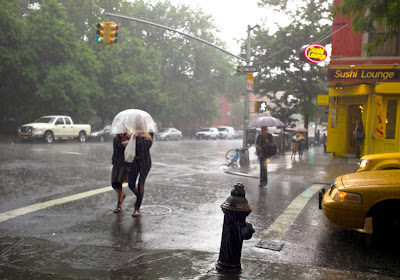 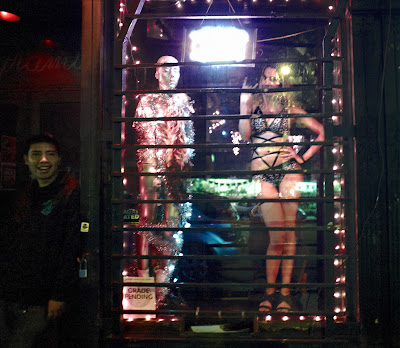 At the T.S.P. Chess Tables 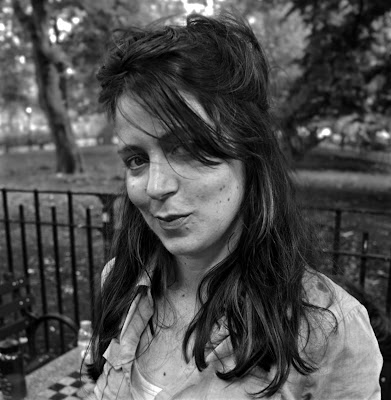 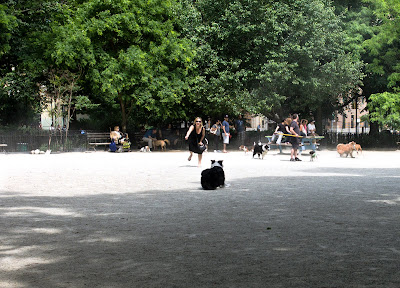 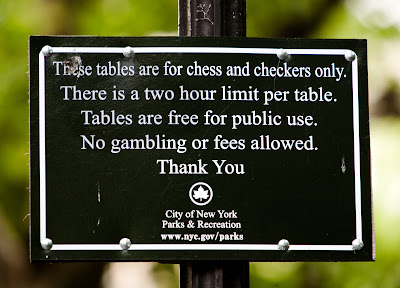 Thursday June 9th some time around 10AM a lieutenant and his driver rolled up to the chess tables in Tompkins Square Park .The lieutenant and the driver exited their vehicle . They walked to one of the chess tables where one man was reading a newspaper and the other man was eating a sandwich .The lieutenant asked to see the 2 men's I.D.s . The men complied . The men were told to leave the area .They left the area as instructed .

The lieutenant then approached another man , sleeping at a near-by table , woke him and told him to leave the area .The lieutenant did not ask this man for an I.D. . The man left without argument .

At this time there were a total 7 NYPD personnel , a lieutenant , a sergeant , 3 uniform officers and 2 plainclothes officers at the tables .The 3 in custody were placed in 2 of the cars and transported to the 9th precinct . Jewels at some point was able to avoid lock-up by claiming that he needed to go to hospital .

We do not know what happened to the second  man arrested but Lisa claims that she was held 10 hours at the 9th precinct . She claims that it was perhaps 2 hours before they did a warrant search . She was ultimately transported downtown to central booking where she was held for several hours , brought before a judge and then released .

The above account of Thursday morning was assembled from the testimony of several witnesses who had been present at the chess tables during the period when the lieutenant was present . All saw and heard the arrest . The testimony was gathered over the last 3 days .

Today we were told of a statement from Deputy Commissioner of Public Information Paul Browne published  in the Village Voice .
http://blogs.villagevoice.com/runninscared/2011/06/woman_not_arres.php

The Commissioner claims that Lisa was not arrested for violating a park rule ,that is sitting at a chess table and not playing chess . His claim contradicts the testimony of 5 witnesses who saw and heard the arrest .

The Commissioner  also claims that Lisa was arrested for outstanding warrants , a larceny warrant for the theft of a womans purse and 6 unspecified warrants for theft of services .

Lisa is not a model citizen , she has a record but this record was not relevant to the first part  of this 2 part post thus we did not mention it other than to note that she claimed that she  had a warrant for not providing the proper paper work at the proper time and place  certifying that she had completed a required term of comunity service .

Lisa was unclear about what the 6 other warrants were about . She believed that they were for arrests  several years ago .Warrants we've noticed over the years have a habit of winking in and out of existence much as virtual particles in  a quantum foam .The judge , according to Lisa , seems to have  cleared all warrants other than the one  that Lisa will answer in late June .

According to Lisa the judge vacated the sitting at a chess table not playing chess charge which Lisa and all witnesses agree was the lieutenants stated reason for her arrest .

If the lieutenant had known of warrants for Lisa's arrest and was intending to arrest her  why did he approach 2 tables before he approached her's? Lisa was the only woman at the tables . Lisa would have been  easily recognized , she  is well known to the 9th precict .Why not visit  her table first if the lieutenant were looking to find and arrest Lisa ?Witnesses claim that 2 tables were cleared of occupants before the lieutenant approached Lisa's table .

If the warrants were so serious that a lieutenant was sent to arrest Lisa as the commissioner seems to claim , why did the judge clear them so readily ?

If Lisa had so many long outstanding warrants  why wasn't she arrested long ago ? Lisa is easy to find . She is in Tompkins Square Park everyday . Lisa is infact well known to many including 9th precinct personnel .

The Commissioner claims that sitting at a chess table not playing chess is a sometimes summonsable offense . Why then did the lieutenant not write a summons rather than  take Lisa and 2 others into custody ? Why did he, as witnesses and Lisa alike claim, point to the sign above and say something to the effect of  "thats why you are being arrested "?

Contrary to claims made other places , no mystery has been solved  . 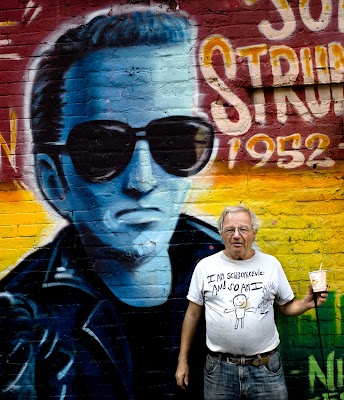 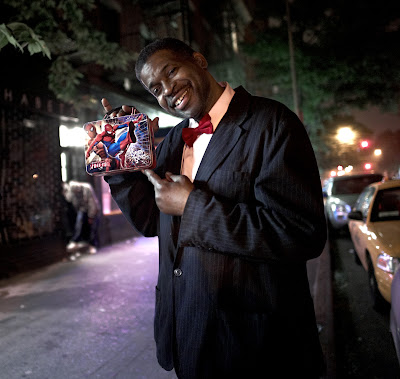 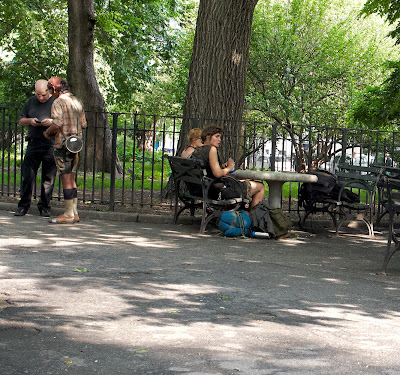 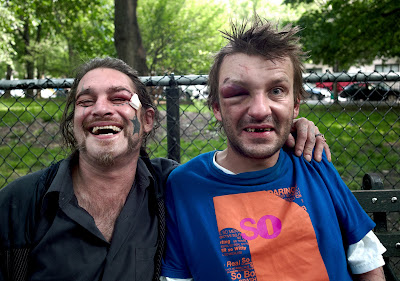 Likely the sidewalk had again smacked Tim a good one in his right eye , no one knows for sure , not even Tim... and Jewels ?Well he made at least 4 trips to Bellevue this last week, his wrists this afternoon braceleted with multiple I.D. tags . He has no idea what sent him to hospital the last 3 times , he remembers nothing  .
In spite of the bumps,scrapes,bruises,swollen red features ... and festering cuts, the boys were in good spirits. Sunday afternoon was being profitably spent looking for that next beer and a smoke while socialising with the half dozen or so extant Crustys in Tompkins Square Park .
# posted by Bob Arihood @ 6:32 PM 1 Comments 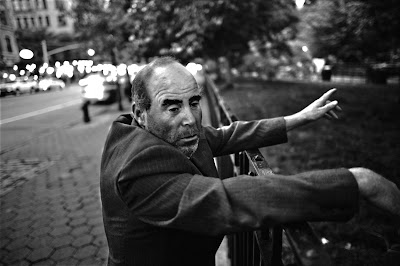