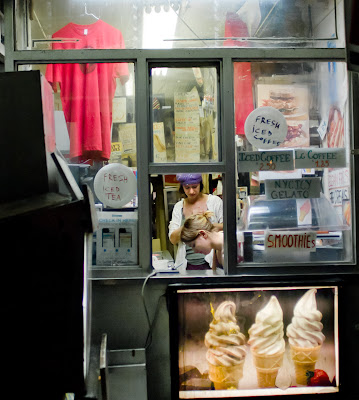 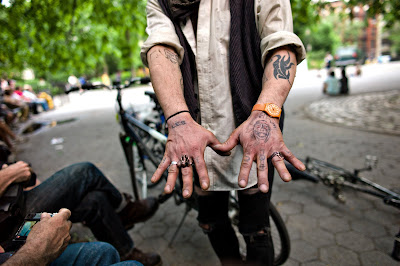 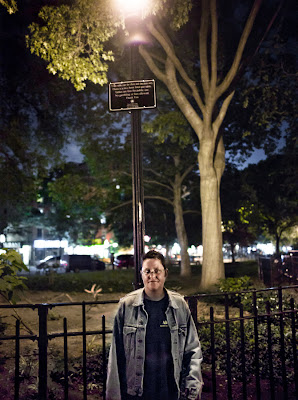 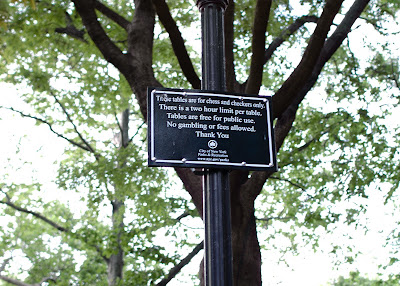 A few days ago we noticed that 4 of the chess tables in Tompkins Square Park had people sitting at them playing chess . Each table had a few people standing around the table watching the players play chess .Anyone who  is actually familiar with T.S.P. though knows that much more than just chess games happens at the chess tables  .

A bit more than a year ago 2 signs were clamped high up on two lamp posts near the tables .What they have to say is seen above . Another park rule that has been only  rarely referred to let alone responsible for actual arrests resulting in even short term incarcerations .

A few days ago at 10 in the morning Lisa (pictured above) was sitting at a chess table . Lisa claims she had been sitting at the table  for approximately 10 minutes when police approached her , referred to the sign above and then arrested her .Two others were taken away with her . At the time of the arrest several of the chess tables had people sitting at them not playing chess .Witnesses that we spoke to mostly corroborate her account of the event . Lisa claims that she spent 32 hours in the system , at the 9th precinct and then downtown at central booking . This all occurred  because, according to Lisa , of a claimed violation of the park rule displayed on the sign above .

Lisa claims that after the arrest ,while in custody at the 9th precinct , police found that she had a warrant for not having provided to authorities at the proper time and place a paper certifying that she had  completed a previous  period of community service .Later, while downtown in central booking , the violation of the park rule for which she was originally arrested was dismissed by a judge.

We appreciate that there are many difficult problems , some involving considerable violence, created by ongoing illegal activities at the  chess tables . We appreciate that the task of policing such activities is difficult and often maddeningly frustrating .We have to remember though that there are certain constitutional protections  afforded to all of us .Law is to apply equally to all and is not to be arbitrarily enforced solely when convenient for those charged with the task of maintaining a reasonably safe and orderly society.

Lisa claims that on Thureday June 9, 2011 at some time around 10AM , a lieutenant directed officers to check her I.D. at the chess  table at which she and 2 others were sitting .Lisa displayed her I.D. as requested .Two or more males at the table next to her's also had their I.D.s checked . No warrants were checked at the chess tables  .The lieutenant instructed officers to take her and the 2 others sitting at her table in violation of the park rule  posted high up on the lamp post (see picture) into custody and remove them to the 9th precinct .Others , including a male sleeping at a table that Lisa claims she knows had no I.D. , remained  at the tables.The males at the next table that had their I.D.s checked were told to leave the area , which they did .

Lisa claims that she was held at the 9th precinct for 10 hours .She does not know when police personnel got around to checking her record for warrants .She was then transported downtown to central booking .After several hours in a holding area  the park rule violation was vacated and she was told to be sure to be present with the proper paper work in hand  at her next appearance date to settle the outstanding warrant problem. 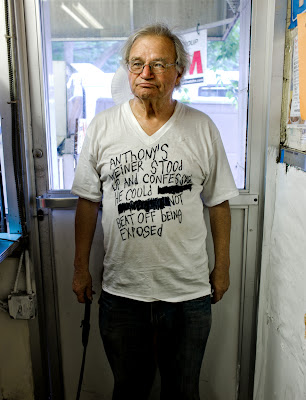 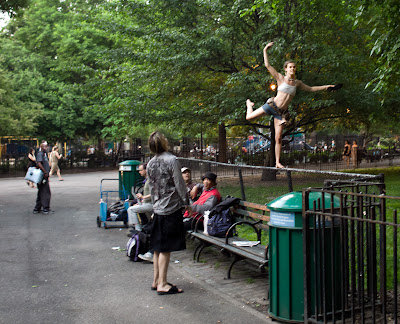 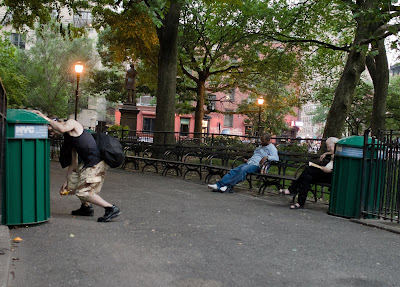 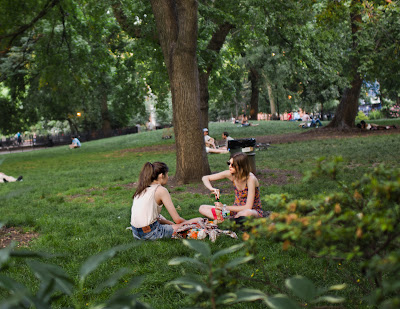 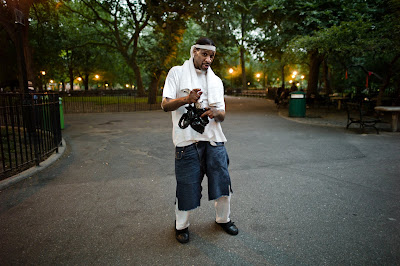 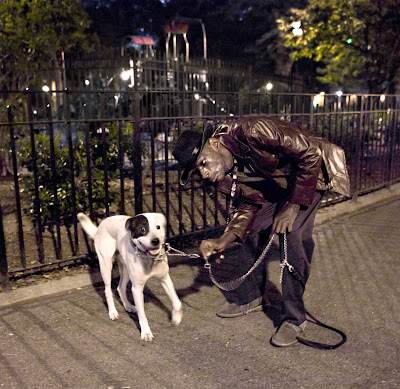 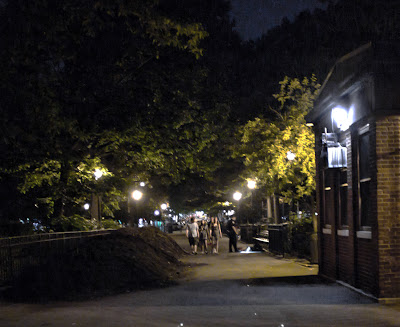 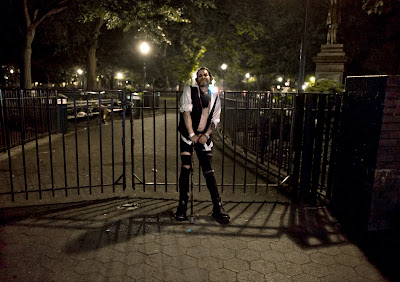 OMG ! Is that Slum Goddess on Line at Pinkberry? 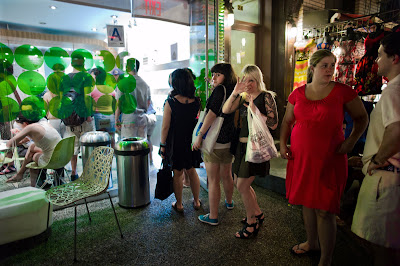 Tacos Morelos , the first permanent food cart on avenue A will be open for business 24 hours a day , 7 days a week
# posted by Bob Arihood @ 4:12 AM 3 Comments

Tito and Conrad at the Entrance to Tompkins Square Park 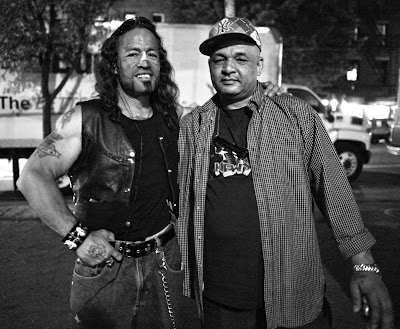 Tito (a.k.a. "Outlaw") just returned from a 4 year incarceration upstate . Since returning he's been trying to find his longtime mate and love , Spike .The word though on the street is that Spike (a.k.a. Lucretia) was arrested for violation of parole a couple of days before Tito returned to the EV.

After Howl in T.S.P. 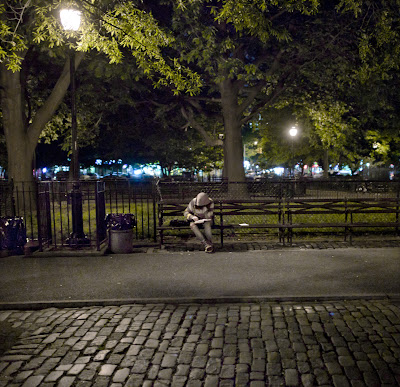 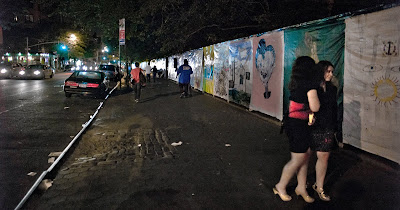 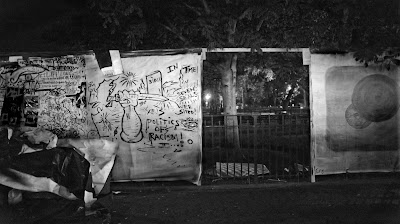