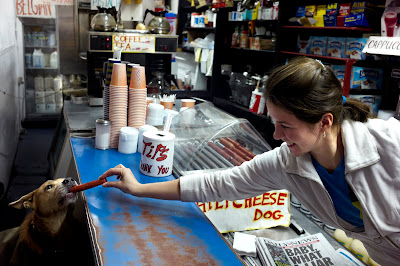 Will There Be Strippers Dancing at Ray's 77th Birthday Party Monday ? Thanks to all the media exposure there were again some early crowds at Ray's tonight .Ray made a little money tonight thanks to all the new customers that visited and purchased his products .
During a later quiet moment in the evening 3 of the community's elders gathered around Ray's coffee maker to ponder these difficult times . There was mention of a new ultimatum that was delivered by the landlord that was troubling for all . There was a lighter moment though for Charlie , Ed and Ray when the subject turned to whether there would be strippers dancing on the blue counter this year as in past years at Ray's 77th birthday party on Monday .
For more on Ray today from EVGrieve :
http://evgrieve.com/2010/01/save-rays-day-set-feb-6.html
# posted by Bob Arihood @ 2:14 AM 8 Comments 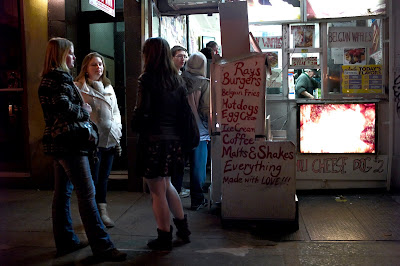 More customers have been coming to Ray's lately . In response to all the media attention Ray's was actually packed at some times Wednesday night .
# posted by Bob Arihood @ 1:56 AM 12 Comments

Ray's Problem is Greater than Just Diminishing Revenues and the Unpaid Rent .... 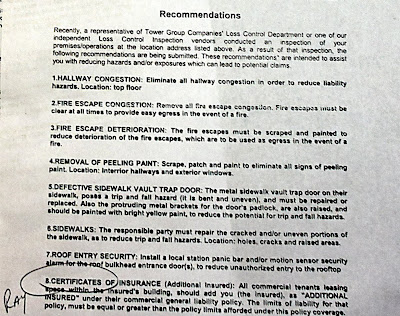 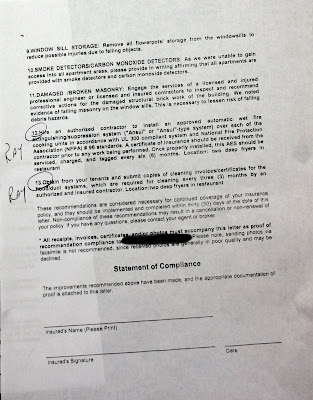 Night before last Fox 5 News noted that in addition to being behind in his rent payments Ray also had a problem with the non-compliance of his facilities with the Fire Code . More accurately stated , the problem is a claimed non-compliance-please click on and read above document- with Article 13 of the NYC building code and this article's governing reference standards.
Above is a document which lists the landlord's insurance company's requirements that must be met before coverage for 113 avenue A can be provided . Notably a ventilation system , a hood and an automatic fire suppression system is requested to be installed by Ray . Quarterly system cleaning certificates are also required . Such requirements for insurance coverage are standard practice .
On the first page of this document this insurance company requires that Ray must add the landlord as an "additional insured" on Ray's own general commercial liability insurance . Ray's insurance must meet or exceed the landlords insurance in coverage . Such is all standard insurance practice . Ray does not have such insurance .
NFPA#96 ( a reference standard of Article 13 of the NYC building code) listed above is : National Fire Protection Assoc. Standard for Ventilation Control and Fire Protection of Commercial Cooking Operations . This standard is one of the the primary controlling standards for commercial cooking operations that produce grease-laden fumes and vapors . By the letter of this standard it does not matter whether such commercial cooking is accomplished with residential or commercial equipment nor does it matter whether there is an open flame or an electric heating element producing the heat necessary for the commercial cooking process . It is the production of and the necessity of removing these combustible grease-laden fumes and vapors that requires the hood , exhaust duct system and automatic fire suppression system .
Ray uses 2 deep fat fryers to produce his Belgian Fries .The landlord's insurer in effect argues that thse 2 fryers produce grease-laden fumes and vapors and that thus Ray is required to comply with the NYC building code requirements listed in the above document ..
Article 13 of the NYC Building Code is commonly the Mechanical Ventilation Code .
UL300 is a reference standard that certifies automatic fire suppression systems of the "Ansul " type , seen commonly in kitchens throughout the city . There are of course other codes and standards governing here also .
For more of the latest from EVGrieve concerning Ray and his candy store :
http://evgrieve.com/2010/01/save-rays-twitter-feed.html
# posted by Bob Arihood @ 11:20 AM 14 Comments 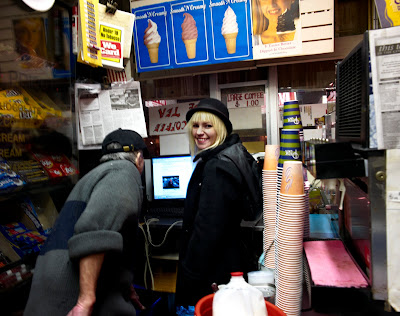 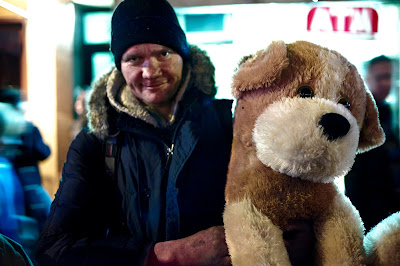 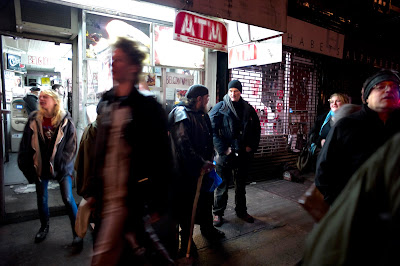 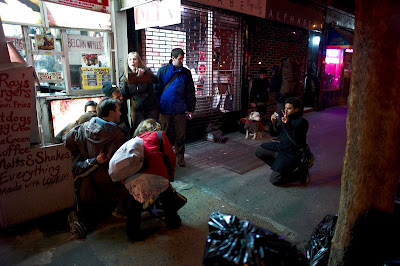 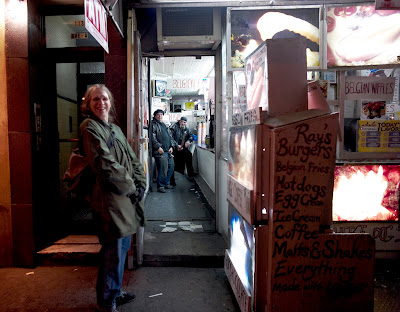 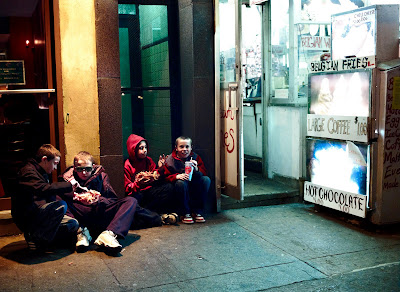 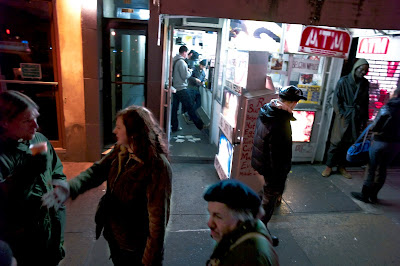 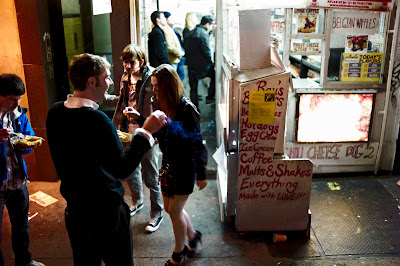 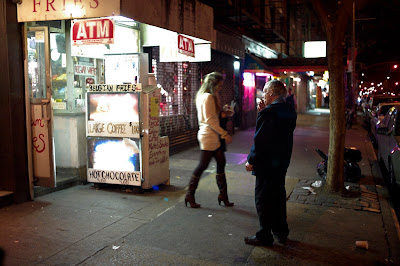 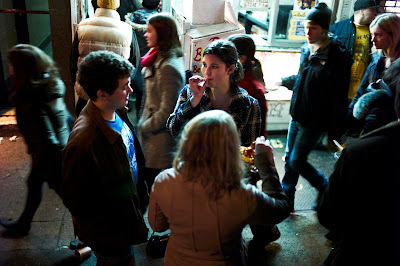 Ray made a little more money on Friday and Saturday night than he had been making on previous week end nights . The warmer weather brought larger crowds to the street . Saturday night was more productive than Friday . But the crowds this year are still smaller than last year and they thin out earlier . The following rainy Sunday was a money loser .
Both the New York Times and Fox 5 News covered Ray today :

Lorraine Has Been Badly Beaten but a Drunken L.E.S. Jewels Still Has to Mess With Her .... 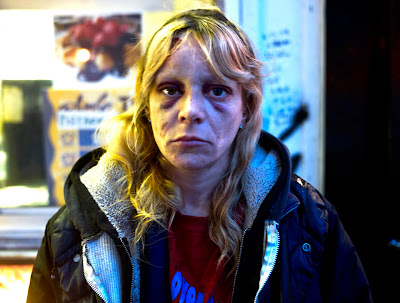 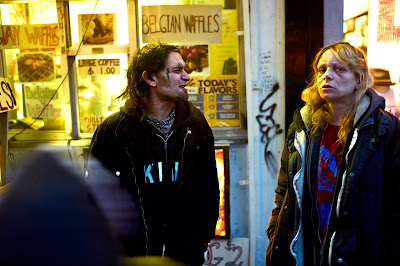 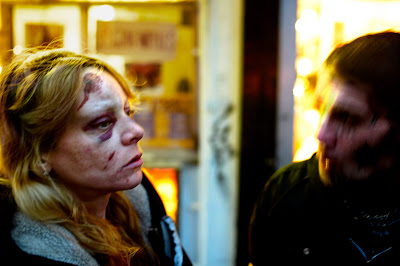 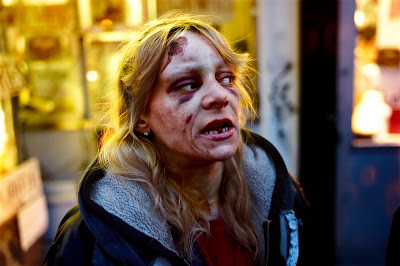 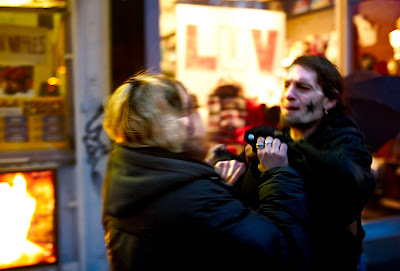 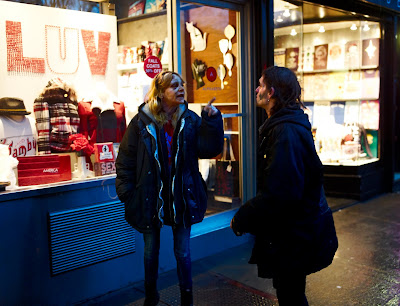 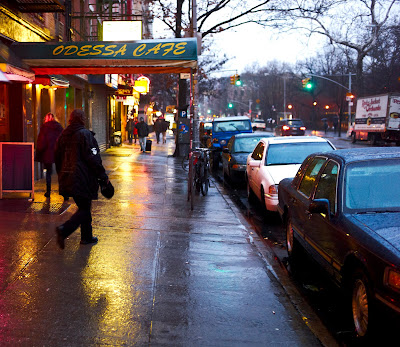 Lorraine had been savagely beaten sometime early Saturday morning . We were told by several different folks that she wanted us to photograph her wounds .It took more than a day but finally we did find her , very animated and screaming loudly at Jewels , at the corner of 7th st. and avenue A . Photographing her was not to be a simple task .
When we arrived at the corner of 7 and A , L.E.S. Jewels had just pissed in the phone booth near the corner . Jewels had soiled with his urine the infamous blog legend known as the "Pee Phone" . Lorraine , one of the few who actually uses this booth to make and receive calls was pissed . At one point she slugged Jewels for his impropriety in addition to screaming all her damning invective.
Jewels was more than matched and decided to back off for a while . We took advantage of the temporary truce by attempting to talk to Lorraine . She was not calm .
We asked Lorraine what had happened to her the previous night but she would not tell us who had beaten her or where the attack occurred . She did say though that she was beaten because she was white . She said she wanted a picture taken so that people would know what had happened to her . She also said "I want some pictures for the DA so that I can make some money" .
After Lorraine calmed a bit we attempted a picture in front of Ray's Candy Store . Success was not to be had though . Jewels stepped up to Lorraine and started pushing her and yelling at her . It was as though he was jealous of the attention that she was getting .
Jewels' interference led to a fight with groans , grabbing , pushing and a few punches . L.E.S. Jewels was no match for Lorraine though . She punched him and moved him around the sidewalk like a pro . Lorraine beat him and she scolded him . It was but a brief skirmish with only a few real blows landing and when finished , Jewels whined a bit and Lorraine left . Jewels followed her up avenue A bitching and whining ; then sat down on the doorstep next to Odessa restaurant . Lorraine left avenue A and there was thus no proper set of evidential photographs accomplished this day .
A few minutes later police arrived . Before the confrontation with Lorraine occurred , Jewels had entered Ray's and accosted and terrified the young woman working behind the counter . She called the police . There was a lecture from the police officers and then they left ... with Jewels remaining free to roam the streets .
Jewels and Amy had come to Ray's early Sunday morning . Jewels was not drinking then and there were no problems . Later Sunday morning though Jewels started drinking and of course did not stop .He caused problems for folks the rest of the morning and all day Sunday . He fought with some of the guys in Tompkins Square Park . Jewels attacked and beat a helpless Edgar in TSP . Later according to Alphabets staff , stumbling drunkenly , he barged into Alphabets , fell over and scattered merchandise all over the store . All pretty much the usual L.E.S. Jewels-and-alcohol thing that we all know so well .