"Crusty Row " is Closed and Life Proceeds as Usual in Tompkins Square Park with Jewels on a Wild Drunken Rampage ... 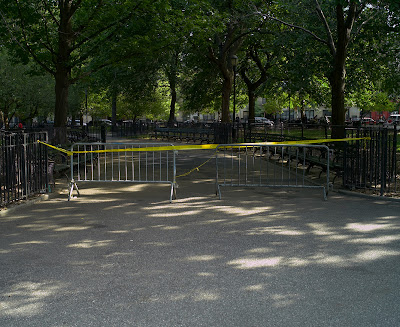 For the last three days "Crusty Row" has been closed with metal barricades and yellow tape . Though there is some evidence that seating in the area is being re-painted we are tempted to surmize that the closing also has another purpose .

We suspect that the more urgent purpose is to "clean-up " the park by denying the regular , loyal congregants of this row of seating the possibility of idling their days away together on this row of seats .If in fact we are correct here then the park administration's closing of the row of seats has surely failed in its most urgent purpose .The unwanted park denizens have simply moved to other parts of the park and the real problems such as Jewels and his wild and dangerous drunken antics have only continued to grow worse .

On Thursay , earlier in the day , Jewels , drunk as usual , struck Keith Riley in the head with his cane just outside "Crusty Row " . Keith later described what happened : "Jewels hit me with his cane to the left side of my head ,the side most damaged , and I blacked out and went down..." . Keith was taken to the hospital for observation and treatment .

Keith had recently signed himself out of Belleview hospital against medical advice . He had spent more than 2 weeks in critical condition in a coma . With serious life-threatening injuries to his brain he was kept in the intensive care unit at Belleview hospital . Keith was in need of such care because of a severe beating which involved many repeated kicks to his head . This beating occured a couple of months ago in Tompkins Square Park .

Keith , according to his doctors should not have been out of the hospital , but he was ... and a wild drunken Jewels struck him on the more seriously damaged side of his head with his cane with sufficient force to knock Keith out and send him back to the hospital .

There have been consequences to Jewels' caning of Keith . The red and swollen hands below are claimed to be the instruments used to mete out the Tompkins Square Park version of summary justice . Jewels now is not just a drunken mess , he is a mauled and beaten mess , he has a black eye and some new pains . 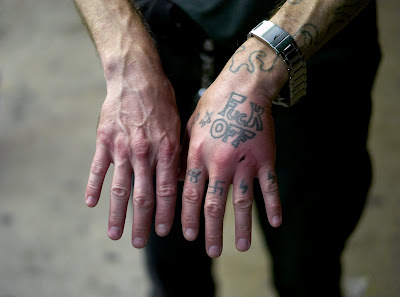 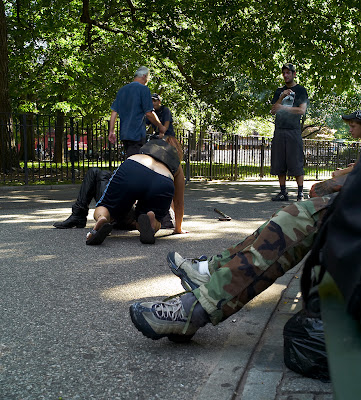 Others including the woman above and below who has pummeled ,wrestled and seriously scolded Jewels have in one way or another expressed thier outrage at what Jewels did to Keith . 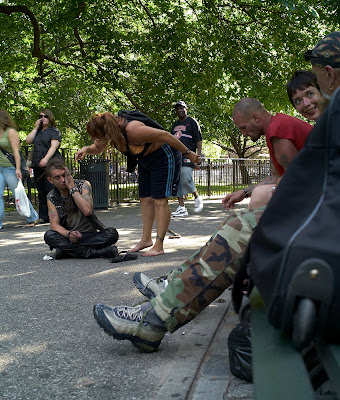 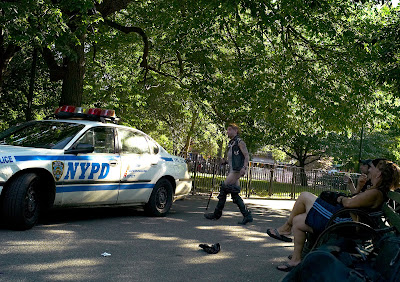 Jewels not being one to give-up continues his drunken spectacle by running up to a police RMP with his pants at his knees to display his private parts ....all 20 ft. from a childrens playground .
A few minutes later an exhausted Jewels walks to a bench sits down and passes-out . Shortly he falls off the bench , continues to sleep on the ground in front of the park bench and later , according to witnesses , wakes -up , pulls down his pants and defecates at the bench in front of several children standing 50 ft. away at the entrance to the playground . Certainly the product of his defecation was still quite noticeable at the front of the bench many hours later . 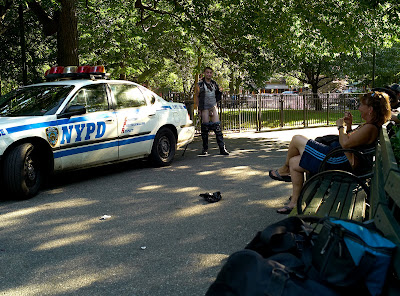 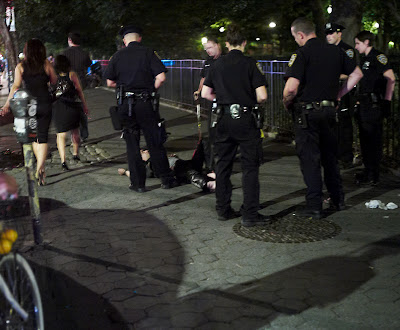 Many hours later Jewels , still drunk , leaves the park with everyone else as it is closed at midnight passing-out out in a limp heap near Keith , who has returned from the hospital , just to the side of the entrance to the park .
Later someone calls concerning the two passed-out drunks and 3 police RMP s arrive . Keith moves on but Jewels doesn't move easily and police drag him a bit down the street using the hook of his cane to roust him .No one wants to touch him ...and justifiably so . Finally Jewels rises and walks to the other side of avenue A and stops at Ray's and passes out again . 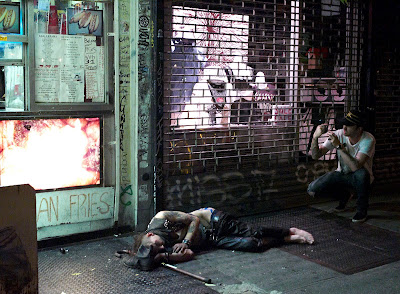 As Jewels sleeps at Ray's passers-by have their fun with him . Jewels defecates again but in his pants this time which he pulls down a bit . A passer-by writes in blue felt-tip marker on his bare ass . Another several passers-by photograph the pathetic scene .Finally a TSP regular that doesn't much care for Jewels places a lighted cigarette in his open pants . This of course wakes Jewels in a hurry as seen below . Jewels stands up noticing the foul nature of his pants and his sticky fouled fingers ,wipes his fouled hands on Ray's sign and walks to the next doorway to again pass-out . . 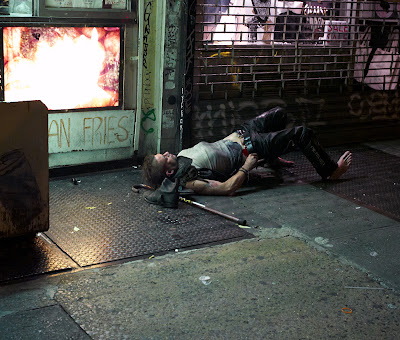 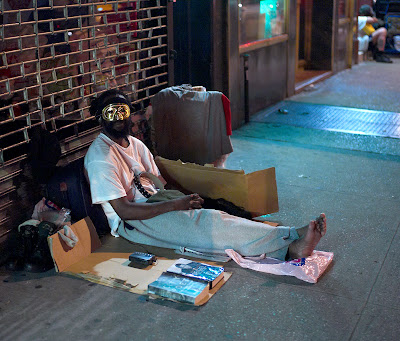 A View of the Old Leshko's Coffee Shop 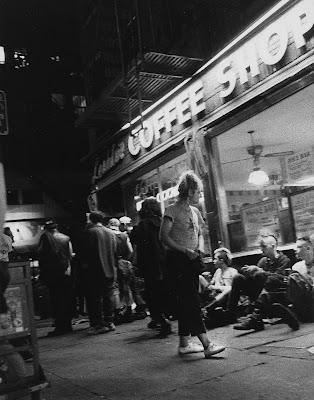 Sassy walks past some punks leaning against the front of the old Leshko's while others gather near the entrance near the corner of 7th st. and avenue A . Leshko's was a long established neighborhood institution at this location until the coffee shop was replaced by "The New Leshko's" which was then shortly replaced by today's Yuca Bar .
# posted by Bob Arihood @ 4:50 AM 0 Comments

The Tap Dancer Photographed at Ray's 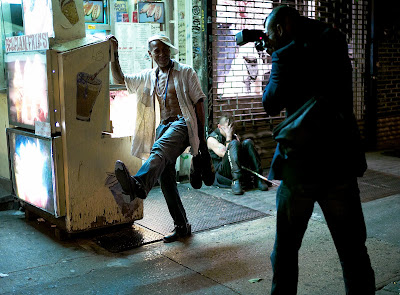 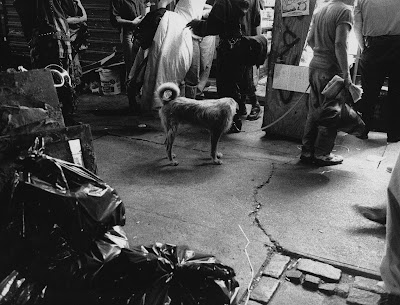 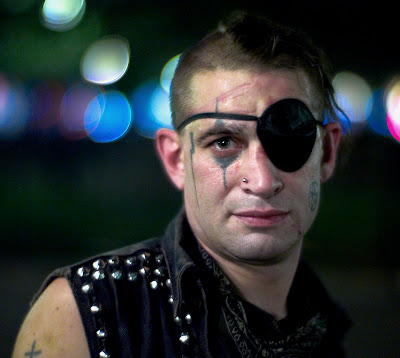 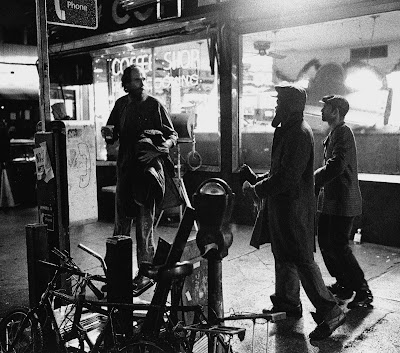 Looking beyond "Loan Shark Bob"s collection of bicycles into the bright lights of the old Leshko's , we see Lawrence backing away , coffee in hand , from "Sloth" ( far right ) and an associate who intend to harm him if he does not just walk away. The nameless associate had once clubbed Lawrence over the back of the head with a large wooden "two by four", an event which perhaps Lawrence has in mind and , though protesting , Lawrence does ultimately just walk away down avenue A , disappearing into the night.
# posted by Bob Arihood @ 2:50 AM 0 Comments 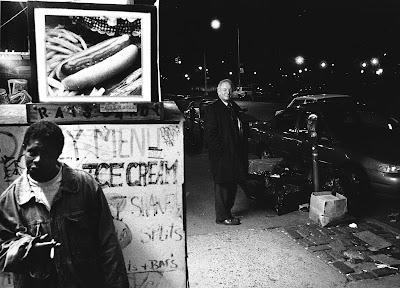 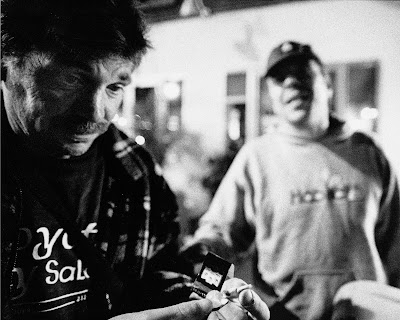 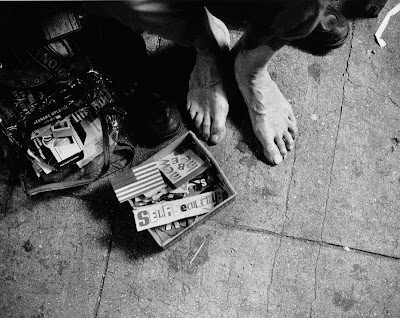